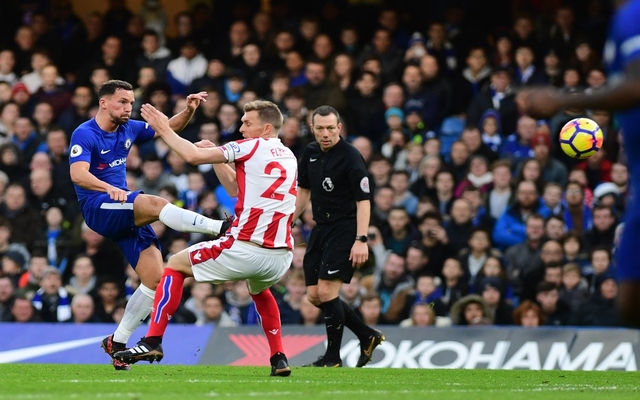 Chelsea midfielder Danny Drinkwater had a slow start to life at Stamford Bridge, but he’ll soon forget all about that with goals like this one.

The 27-year-old struggled with injuries early on this season, but after recovering and getting back to full fitness, he’s started to feature for Antonio Conte on a more regular basis.

In turn, given a place in the starting line-up against struggling Stoke City at Stamford Bridge on Saturday afternoon, he made sure he grabbed the opportunity with both hands and scored this superb goal.

Antonio Rudiger had already given the hosts the lead while Pedro added a third before half-time to put Conte’s men in complete control, but this goal will stand out as the best of the bunch.

The England international is the first Englishman to score for the Blues since John Terry back in May earlier this year which is quite the stat that shows the foreign influence at Chelsea, and he’ll hope to add plenty more to his collection but few are likely to be as good as this one…

Danny Drinkwater with an iniestaesque finish.

Pedro shows off some tekkers on the wing but his attempted cross is blocked and finds its way to Drinkwater who finishes into the far post side netting on the volley. Class goal. 2-0. #CFC pic.twitter.com/kfTC4VRkah

Danny Drinkwater is the 1st Englishman to score for @ChelseaFC since John Terry v Watford in May pic.twitter.com/6iYtSVCcr4