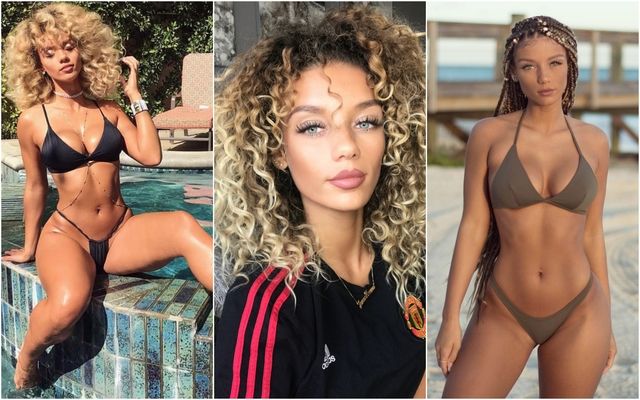 Man Utd ace Jesse Lingard probably won’t want to look at the papers on Sunday morning, as his personal life has made the headlines.

According to The Sun, the 25-year-old has been caught out cheating on model Jena Frumes, who he has been dating for a year, with a woman named Leonie Borek.

Naturally, further details have been included in the report but those are all alleged claims for now while Lingard hasn’t, and probably won’t get the chance to, put his side of the story forward.

In turn, we’re more interested in Frumes and trying to wrap our heads around why he would even potentially consider cheating on her as per the report if she is indeed dating the Man Utd star.

The US Instagram model, 24, has seemingly made quite the impression on Lingard, while she’s bagged 2.6 million followers on the social media platform to suggest that she’s a pretty big deal!

Judging on the photos below, it doesn’t take much to realise why as she looks absolutely stunning.

It remains to be seen how the situation plays out for Lingard and whether or not he has ruined his relationship with Frumes, as she posted the below tweet on the day the allegations came out, which would suggest that she’s not impressed with what she’s seen.

May your loyalty be stronger than your temptations in 2018!

In the waves of change we find our true direction. ?? ? #inspirationalQuoteOnAPicOfMyTush

Thinking about going back to this hair style for a bit? Should I?

Yes my eyes are real? but I owe the credit of these flawless lashes to @lashbeam_byfetia ?? Thank you??

You make me a better me, I make you a better you..?