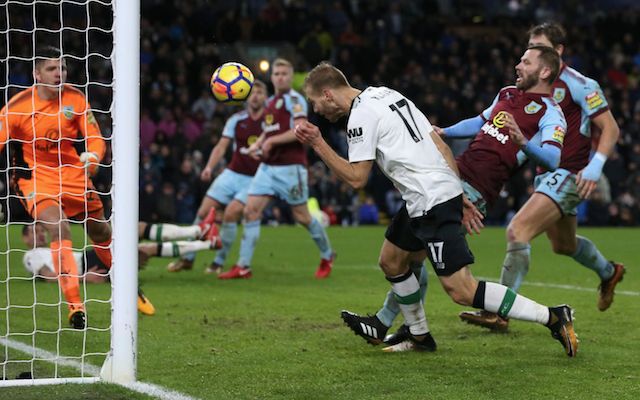 Liverpool needed a last minute winner to sink Burnley at Turf Moor with goals from Sadio Mane and Ragnar Klavan handing the Reds the three points.

Jurgen Klopp’s men were frustrated in the first-half after failing to create many chances but the game exploded into life in the final few minutes.

Liverpool were without their two key stars with both Philippe Coutinho and Mohammed Salah not travelling with the squad.

The Reds relied on Saido Mane to lead the line and the Senegal international looked to have done enough for the Reds when he gave them the lead on the 61st minute.

However, with just three minutes remaining Johann Berg Gudmundsson looked to have stolen a point for Burnley.

In the dying seconds of extra-time however Ragnar Klavan scored his first ever goal in the Premier League to give Jurgen Klopp and Liverpool a last minute win.

Alex Oxlade-Chamberlain received a flurry of abuse from Arsenal fans when he swapped the red of North London for the red of Liverpool in the summer. Further, the Englishman struggled in the opening half of the season to secure regular playing time in Jurgen Klopp’s side.

But with an injury to club captain Jordan Henderson in recent weeks the Reds have needed a star to step-up in the central midfield department and Chamberlain has done just that.

The star impressed throughout and floated in the crucial free-kick which lead to Ragnar Klavan giving Liverpool a last-minute winner.

Jeff Hendrick struggled to trouble a Liverpool defense that has been exposed on numerous occasions in recent weeks. Further, when the Burnley man was replaced by Sam Vokes with twenty minutes remaining the Burnley attack looked far more potent with Vokes providing the assist for Burnley’s late equaliser.

What a moment to register a historic goal…

1 – Ragnar Klavan’s goal for Liverpool is the first scored by an Estonian player in Premier League history. New.

Love that Liverpool got a result after the pundits were slagging Klopp off for his rotation policy. It’s working. Accept it.

When Liverpool finish 2nd this season we’ll look to these back to back wins against Leicester and Burnley as the turning point. Incredible grit and desire.

For a side so regularly labeled serial bottlers, Liverpool have shown tonnes and tonnes of bottle in these last couple of games to pick up 6 points.