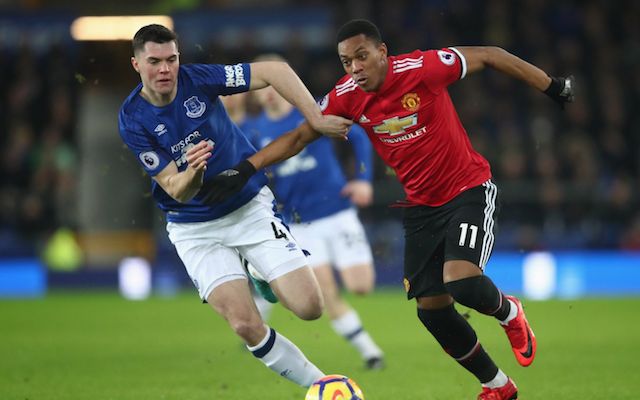 Wayne Rooney received a warm reception from the travelling Man United fans but the former Reds skipper was unsuccessful as Everton hosted Jose Mourinho’s side.

United were unable to breakdown a stubborn Everton in the first-half but broke the deadlock in the 57th minute through Anthony Martial.

Martial latched onto an assist from Paul Pogba and Mourinho’s side looked comfortable until the final whistle.

Jesse Lingard sealed the victory on the 81st minute and capped off an outstanding individual display.

That man Jesse Lingard has been a glimmer of light amongst a horrid set of results for United recently and the Englishman shone once again.

Lingard now has seven goals and four assists in the Premier League this season; more than huge star’s such as Alexis Sanchez, Eden Hazard and Dele Alli.

Wayne Rooney struggled against his former side and a yellow card on the 43rd minute combined with being subbed off on the 62nd minute meant it was one to forget for the Toffees skipper.

35 – Manchester United have won more @premierleague games against Everton than any other team has won against a single opponent in the competition (35). Devilish.

José Mourinho has done wonders with Jesse Lingard. Finally looks like he has matured into a reliable player and is in spectacular form. Mourinho deserves credit.

Opinions are fluid based on performance

Lingard is having a great season so far. Keeps silencing the tapping club fans with zero league title in the last 28 years… And Martial is United’s future. He is so classy with the ball. Fantastic player.

The best thing about Lingard is.. the regularity that he’s on social media means that he sees the amount of hate and disgusting abuse he gets from our very Own fans.. yet he’s able to not be affected. Kick every ball like it’s his last n now is playing magnificently. Perseverance