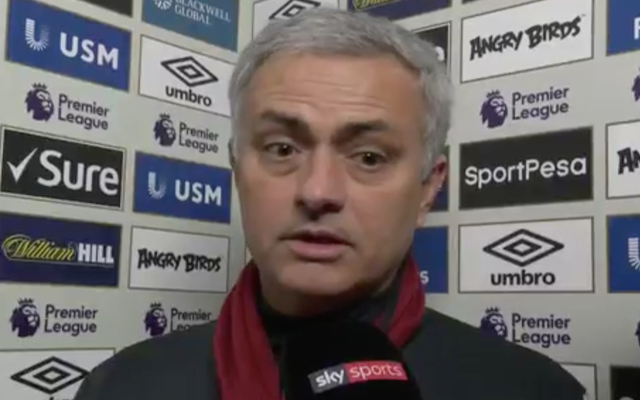 It’s fair to say that the ongoing criticism from Paul Scholes hasn’t sat well with Man Utd boss Jose Mourinho as he hit back on Monday night.

As seen in the video below, Scholes was particularly critical of Paul Pogba following the 0-0 draw with Southampton at the weekend, as he believes that United fans aren’t seeing the best of the Frenchman.

Mourinho has always strongly defended his marquee signing ever since he returned to Old Trafford, and it was no different this week as Pogba was influential in the 2-0 win over Everton which ended a four-game winless streak for United as the pressure started to build on their boss.

Whether it’s a clever thing to do or not is up for debate, as some supporters will like Mourinho standing up for his players while others won’t appreciate him having a pop at a legend and getting involved in a war of words, but he hasn’t held back on this occasion.

“I think the only thing Paul Scholes does is criticise,” said Mourinho, as per The Mirror. “I don’t think he comments, I think he criticises, which is a different thing.

“I think Scholes will be in history as a phenomenal player, not as a pundit.”

The Portuguese tactician went on to add that he believes Scholes would be happy to enjoy ’25 percent of the success that he has had’ in his managerial career, while he also addressed the larger issue of the likes of Gary Neville also wading in as he believes they all want to be in his position.

With enough pressure on his shoulders to deliver trophies and positive results on the pitch this season, it has to be questioned as to how wise Mourinho is in escalating this situation. It remains to be seen what the likes of Scholes and Neville have to say next time they’re on punditry duty…

“Where’s the Paul Pogba we saw at Juventus? The player they bought…” ?