Roma midfielder Radja Nainggolan got himself in hot water for his celebrations on New Year’s Eve, and has since been forced to apologise for it.

The Belgian international filmed himself drinking and smoking while on Instagram stories, as seen in the video below, and at one stage he even admits that he has had a little too much to drink.

Having initially hit out on social media at those criticising him for the video and enjoying himself, as seen in his tweet below, he has since backtracked and posted an apology for his actions.

“I am very sorry for what happened last night. Last night I went too far: I saw it as a special night, where it is OK to be a little more excessive, but of course I did not want to set a negative example.

“For this reason, I feel the need to apologise for my words and my behaviour.”

Roma were last in action when they were held to a disappointing 1-1 draw by Sassuolo at home, while they’re not back on the pitch until January 6 when they take on Atalanta.

In that sense, Nainggolan can surely be forgiven for enjoying himself over the break a little, but clearly the club expect him to set a standard and be a role model, and so his antics on NYE weren’t in keeping with that.

The 29-year-old has scored two goals and provided four assists in 21 appearances so far this season, and as a leading figure in the squad, much more will be expected of him as Roma look to qualify for the Champions League and keep their hopes of success in Europe this season alive too. 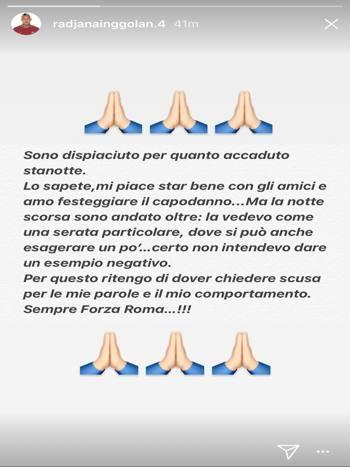