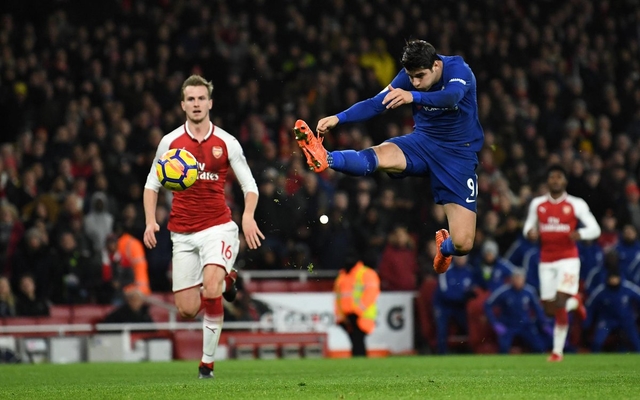 Chelsea were held to a 2-2 draw at Arsenal on Wednesday night after Hector Bellerin scored a dramatic late equaliser, much to the frustration of the visitors.

Goals from Eden Hazard and Marcos Alonso had turned the game on its head after Jack Wilshere had given Arsenal the lead, and the Blues looked on course to claim all three points.

However, Bellerin had other ideas as he lashed home a fourth goal of the game to ensure that the two sides had to settle for a share of the spoils.

It could have been a very different story had Alvaro Morata taken his chances though, as the Spaniard spurned numerous opportunities and in turn was unsurprisingly the subject of plenty of anger from supporters on social media.

The 25-year-old has scored 12 goals in 26 games for Chelsea so far this season, but his form in front of goal on Wednesday night was awful as he showed little composure in one-on-one situations as he had a late chance to win it too.

Instead, Chelsea were forced to settle for a point, and it wasn’t just Morata who came under fire from supporters. Tiemoue Bakayoko was singled out too for his poor performance in the midfield battle, and that’s becoming a recurring theme for the Blues as he seemingly continues to struggle to adapt to the English game on a consistent basis.

After a glance through the tweets below, it’s fair to say the reaction wasn’t kind to either star man…

Morata please get out of my club I don’t understand how he can’t get a shot on target.

Morata’s misses cost us the game.

Morata cost us that game. Learn to finish.

How bakayoko played 90 mins is beyond me

Get Alvaro out now!

Morata was terrible. As was bakayoko. Drinkwater and Michy to start next game. Morata take some finishing practice please ffs