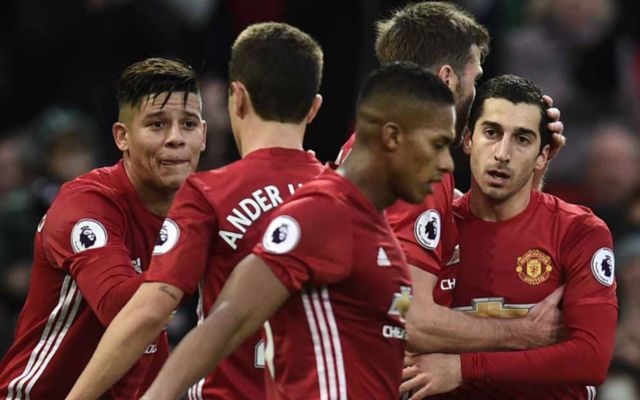 After being replaced at half-time in Man Utd’s win over Derby County in the FA Cup on Friday night, it doesn’t look good for Henrikh Mkhitaryan.

The Armenian international has struggled badly in recent months, being dropped from the squad for five consecutive Premier League matches, while his last goal in the league came back in September, with his last assist dating further back in August.

In turn, what was a positive start to the campaign has become a distant memory, and the player who rattled in 23 goals and a staggering 32 assists in his final season at Borussia Dortmund in the 2015/16 campaign looks to be lost.

Whether it’s a complete loss of confidence or otherwise, Mkhitaryan simply isn’t playing at the level that United fans know he’s capable of, and as a result, it’s leading to question marks over his long-term future at Old Trafford.

Particularly with Jesse Lingard in great form currently as he stole the show with another stunning goal against Derby, coupled with the likes of Marcus Rashford and Anthony Martial offering more on the flanks with their pace, movement and eye for goal, it’s becoming increasingly difficult to make a case for Mkhitaryan to stay in the line-up and prove his worth.

Mkhitaryan is finished at Utd I’m telling you

Mkhitaryan has either decided his future lies elsewhere or his confidence is completely shot. Either way, he should not be playing #MUFC

That is it for Mkhitaryan… He is done at united!

Surely this will be Mkhitaryan’s last outing for Man Utd? Doubt he’ll be coming out for the 2nd half at this rate

Mkhitaryan’s Old Trafford career seems to have come to an abrupt end overnight. Man seems all bereft of any footballing skill & ability. I’m up for nursing him back to form but by god, he looks done. #MUNDER

Can’t see Mkhitaryan lasting much longer at United. Manager humiliating him. Scapegoat for no reason at all.

It’s tragic to see Henrikh Mkhitaryan reduced to the ghost of his former self. He was such an exciting player last season. #MUNDER #MUFC

Really feel for mkhitaryan. Such a good player but things not going his way

United clearly didn’t do their homework on Mkhitaryan. Mentally weak is an understatement, Mourinho has already admitted he struggles to get the best out of such players. Asks the question if he was even a Mourinho signing. Probably Raiola’s doing which is where the main issue is