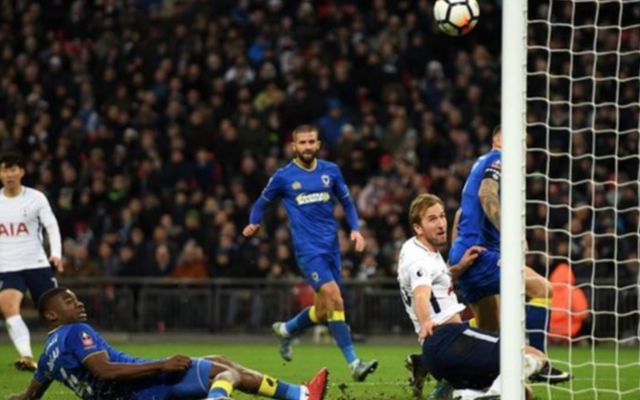 Spurs had Harry Kane to thank today, as the England international bagged  two-minuet brace to help his side sweep past League 1 Wimbledon in the FA Cup third round

The home side took until the 63rd minute to open the scoring, after a ball into the box was poked home by Kane to give his side the breakthrough.

Kane then bagged his second just 93 seconds later, after he swept the ball home to put Pochettino’s side firmly in the driving seat.

Belgian international them completed the scoring just minutes from time, after his 25-yard effort as deflected in to give Spurs a comfortable 3-0 over the League 1 minnows.

Spurs’ forward talisman Harry Kane was immense today, with the striker’s two goals going a long to way to helping his side secure their place in the fourth round.

The 24-year-old took both of goals just as you would expect him to, with Kane now sitting on 26 goals in all competitions, it remains to be seen just how many goals the striker can achieve this season.

Harry Kane. Always on target. Always in the back of the net. World Class.

This from Opta wouldn’t have filled Wimbledon fans with any confidence going into the match today, and rightly so!

1975 – Tottenham haven’t lost a home #FACup match against a side from a lower division since a third round replay vs Nottingham Forest in 1975, winning 30 and drawing seven since. Tyranny.

Harry Kane is all class, bloody love him

Harry Kane is so good ?

Harry Kane is too good #coys