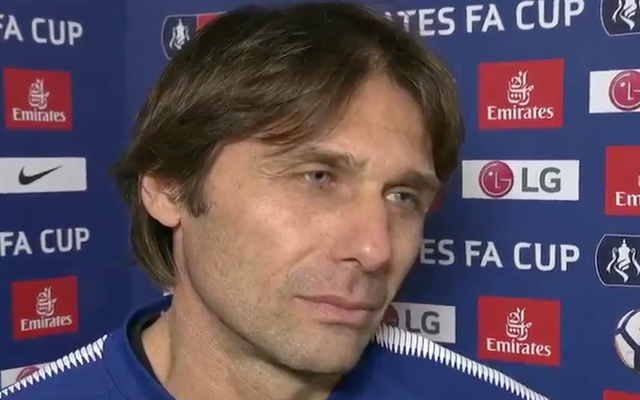 The verbal battle between Chelsea boss Antonio Conte and rival Jose Mourinho shows no sign of stopping any time soon as they continue to exchange insults through the media.

After things kicked off earlier in the week, the Italian tactician was once again asked for his opinion on the situation and Mourinho following his side’s disappointing goalless draw at Norwich in the FA Cup.

Clearly, Conte wasn’t in the mood to mince his words, as he went on the attack directly as he responded to Mourinho’s dig over match-fixing issues in his past, as he labelled his rival a “little man” having commented on a situation that he isn’t entirely familiar with, as seen in the video below courtesy of BT Sport.

That wasn’t enough it seems, as the Metro report on how Conte also branded his opposite number “fake” as he hit out at his actions regarding Claudio Ranieri.

Mourinho has never had the best of relationships with the former Leicester City boss, having taken over jobs after him in England and Italy.

However, when Ranieri was sacked by the Foxes less than a year after winning the Premier League title with them, Mourinho wore a tracksuit top with his ‘CR’ initials on them in a show of support. Clearly, Conte wasn’t impressed with it.

“When you offend Ranieri for his English, then when Ranieri was sacked he [Mourinho] put on a shirt for Ranieri. You [Mourinho] are a fake.”

It certainly promises to be interesting when Chelsea head to Old Trafford in the Premier League on February 25, as there could be a few sets of eyes on the touchline to watch Conte and Mourinho rather than what’s going on on the pitch.

The pair have previously clashed on the sidelines too having been in angry exchanges during meetings between Chelsea and United, and so this is only intensifying that simmering rivalry.

“When the target is to offend, to insult, I think that you are a little man”

“It’s not a surprise for me”

“This is his way”