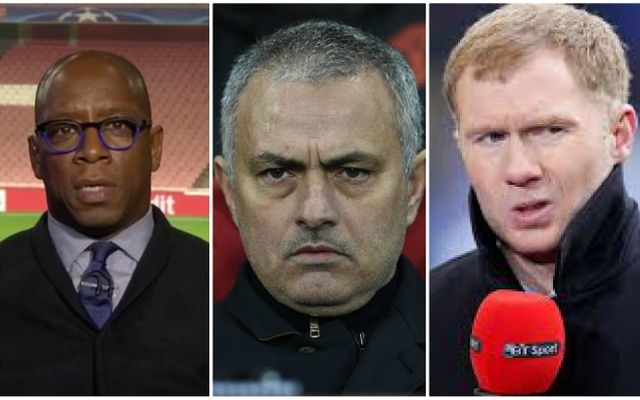 Ian Wright has got himself involved in the spat between Jose Mourinho and Paul Scholes, slamming the Man Utd boss for his retort to the club legend.

Commenting on United’s goalless draw with Southampton at Old Trafford last month, Scholes criticised the team and singled out Paul Pogba in particular.

SEE MORE: Man Utd AT RISK of missing out on exciting January signing for THIS REASON

Naturally, that didn’t go down well with Mourinho, who insisted that the former Utd midfielder would “be in history as a phenomenal player but not as a pundit”.

That will of course split opinion. Scholes is an iconic figure for the Red Devils and having spent his entire career with the club, supporters will not have been impressed with Mourinho having a dig at him.

On the other hand, others may agree with the Portuguese tactician in that the old guard continue to criticise too much as standards and results slip, but there’s no guesswork over where Wright stands on the matter.

“They always say you should pick your battles wisely. And taking on arguably THE best loved of the Class of 92 is one Jose will lose hands down every day of the week,” he wrote in Sun column.

“Never mind skating on thin ice. This was doing so with a rucksack full of bricks.

“And believe me, you don’t want your own fans turning on you.”

It’s a tricky situation for the ‘Special One’, as he’s already clashed with some supporters this season over snide remarks about the atmosphere and backing the players at Old Trafford, and if results don’t go his way and trophies don’t arrive, the last thing he wants is discontent in the stands emanating from something that could be avoided.