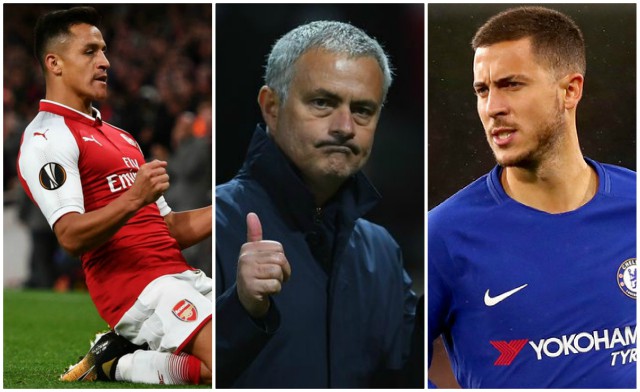 Manchester United could be about to make a big splash in the transfer market, with speculation hotting up that they’re in for Arsenal forward Alexis Sanchez.

It’s no secret that Jose Mourinho could do with more spark up front this season, with his side struggling to break teams down, particularly in the big games as they’ve fallen well behind Manchester City in the title race.

But Sanchez is just one of many top attacking players being linked with United in recent times, so we’ve put together a list of what seem to be the nine main targets.

We’ve also ranked them from worst to best below – do you agree about who would be most suitable for United’s needs at the moment?

Speculation has been hotting up that Manchester United could sign Lucas Moura from Paris Saint-Germain, with the Brazil international no longer a guaranteed starter in the side.

The Metro report that Moura was even left out of PSG’s latest squad, further fuelling talk that he could be on his way out and heading to Old Trafford.

While no doubt a decent player on his day, we’ve ranked the 25-year-old last in our list due to his struggles for consistency with PSG and with generally stronger performers being linked with the club elsewhere.

Yahoo Sport recently linked United with a move for Ajax wonderkid Justin Kluivert, who looks a real talent in attack based on his early performances for the club.

However, the Dutch teenager is not currently at the level of some of the other names Jose Mourinho appears to be looking at.

While Kluivert could be a great signing for the future, now is probably not the time for him to come in and deal with the pressure of being first choice in the Reds’ attack.

The Daily Mail recently linked United with a move for Bordeaux starlet Malcom, valued at around £50million.

Few would complain if the promising young Brazilian came in, but as with Kluivert above, he remains relatively unproven at the top level so may not be ideal just for the moment.

On top of that, the signing might just get trickier with Gianluca Di Marzio also linking Malcom as a transfer target for Arsenal.