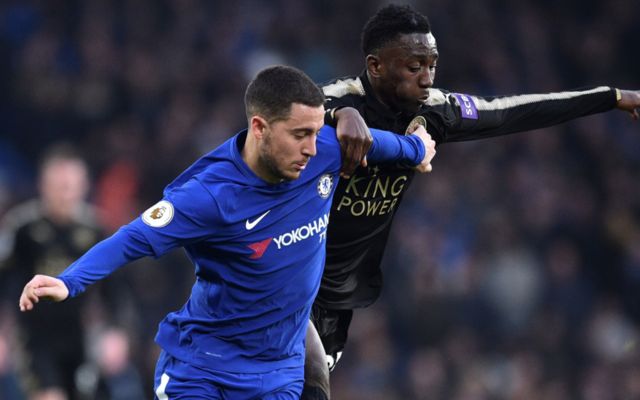 Chelsea were held by 10-man Leicester City at Stamford Bridge this afternoon as Antonio Conte’s side suffered their third 0-0 draw in a row in all competitions.

The Blues struggle to test Kasper Schmeichel in the Foxes goal throughout the entire match, with Spaniard Cesc Fabregas coming closest for the Blues.

Leicester were reduced to 10 men in the 68th minute, after England defender Ben Chilwell went in hard on Brazilian winger Willian, however the home side were not able to make the one-man advantage pay as they ended the match all square.

The draw is Antonio Conte’s side’s third 0-0 draw in a row in all competitions, a fact that won’t fill Chelsea fans with confidence going into their League Cup semi final against Arsenal in the near future.

Leicester winger Riyad Mahrez was the best on show today, with the Algerian international causing the Blues all sorts of problems when on the ball for the away side.

Lionel Messi would’ve been proud of Mahrez’s performance today, with the winger being at the heart of all of Leicester’s best moves throughout the entire match.

This sums up the midfielder’s performance today

Riyad Mahrez looking dangerous every time he gets on the ball today. Let’s hope Roman’s watching…

This award will have to go to Chelsea manager Antonio Conte, who made the somewhat confusing to decision to take off both Eden Hazard and Cesc Fabregas for Willian and Pedro in a time when the home side were searching for the opening.

Chelsea have failed to scored in their last three games, something that will surely be on the mind of Conte going into their replay against Norwich mid-week.

This tweet sums up perfectly how Conte performed today

Antonio Conte has given up, its never been clearer.

3 – Chelsea have drawn three consecutive games 0-0 in all competitions for the first time in their history. Blank.

Chelsea certainly not at the races today, and these tweets only back that up!

No cutting edge from Chelsea who were poor. A 3rd successive goal-less draw. Chilwell sending off changed pattern of game. Leicester the better side. #CHELEI

Yet another game where Chelsea’s 3-5-2 is proving ineffective. Way too much strain on Cesc, the wingbacks and Hazard to create. Bakayoko adds absolutely nothing to this system – lazy defensively, poor going forward and labored in possession. Barkley will be a big help.

This was the poorest I've seen @ChelseaFC this season. Bad choice of lineup, tired players, badly weighted passes, all around POOR. Only positive was Cahill injury that forced a right sub in of Christensen & subs of Hazard & Fabregas. Quite disappointing game!

Chelsea look hungover so many poor passes, corners, decisions. Lucky to still be in it.

Moses with a contender for worst shot of all time there. Kind of sums up Chelsea's performance today. So poor