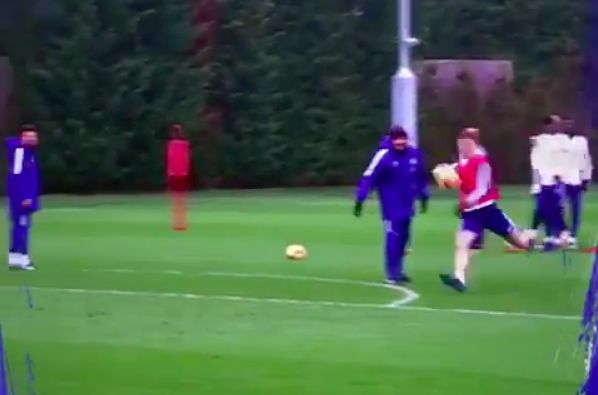 Chelsea new-boy Ross Barkley has uploaded a video of himself in training to his Instagram page – and it features a sublime volleyed effort in a Blues training drill.

Barkley just joined Chelsea from Everton this January and could be in line to make his debut against Norwich City in the FA Cup next week, according to manager Antonio Conte.

The England international has certainly made a decent claim for a first-team spot, looking sharp on the training ground despite missing the entire season so far through injury.

Barkley has long been tipped as one of English football’s best up-and-coming talents, and this is his chance to finally prove himself at a bigger club.

So far, the 24-year-old is making a good effort of things at Stamford Bridge, and Conte may want to take a look at this wondergoal on the training ground if he’s still unsure about the player’s match sharpness.

On his weaker foot, Barkley slammed the ball into the net on the volley, showing sublime technique and finishing ability.

With Chelsea summer signings Danny Drinkwater and Tiemoue Bakayoko failing to impress so far this season, Conte could certainly do with Barkley coming good for the club.

On the possibility of Barkley making his debut in the coming days, Conte said yesterday: ‘I think the idea is more clear now. We must be satisfied with his physical condition.

‘For sure he’s working, very hard. I think that maybe in the next game against Norwich he could be available, be in contention. I hope for this.’