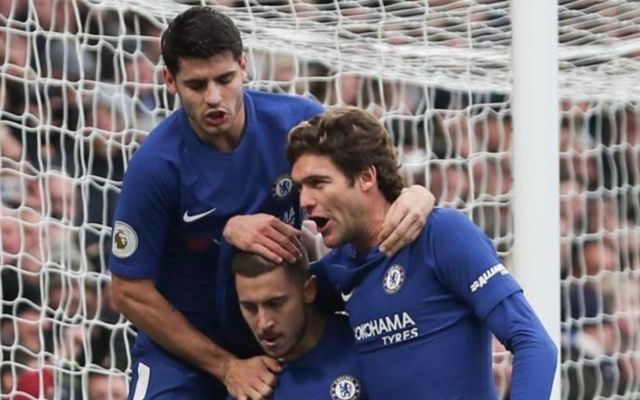 Chelsea drew 0-0 with Leicester City at home in the Premier League this afternoon, with some fans taking to social media to hammer Alvaro Morata for the Spaniard’s shocking performance against the Foxes.

Chances were few and far between in the match, with the best falling to Cesc Fabregas, who saw his well-struck effort saved well by Danish international in the Leicester goal.

Leicester were reduced to 10 men midway through the second half, after Ben Chilwell went in hard on winger Willian, however the home side weren’t able to make their advantage pay as they stumbled to a stalemate with the Foxes.

The 0-0 draw is the Blues’ third in a row in all competitions, a stat that will surely be in the mind of Antonio Conte going into his side’s midweek clash with Norwich at Stamford Bridge.

After the match, fans took to social media to hammer the performance of forward Alvaro Morata, a player who some feel played very poorly today.

Morata just looks lost, too much flouncing, not enough fight. Made one good run the whole game and lifted the crowd, then nothing for the next 60, all we ask for is effort, on and off the ball, it’s not there. One of the basics when out of form

Morata was stats padding with goals in madrid academy , people thought he was elite .

Alvaro Morata has posted more couple photos on Instagram with his wife this season than he has scored Premier League goals.

Morata crumples under the weight of, well, not very much. And quite a few home fans are now on his back for his perceived inability to stay upright.

Morata needs to stop going to ground so often. Hard for runners to get in behind if Morata decides to fall over every time he gets touched instead of holding it up and laying it off. Beyond the poor finishing and dubious composure, it is that toughness that Morata’s game lacks.

Another clean sheet for Morata.

Bakayoko was poor, but Morata is well & truly off form & needs a stint in the stiffs as we used to say!

Morata's stats aren't a problem much like Lukakus. The issue is Morata seems to have one consistent poor trait in finishing from what we've seen and that he has zero pressure or competition for this position. That has to change