Champions League side Spartak Moscow have been caught up in a huge racism scandal after a more-than controversial post on social media.

The Russian side posted a video of players stretching during a training session with the caption ‘see how chocolate melts in the sun.’ 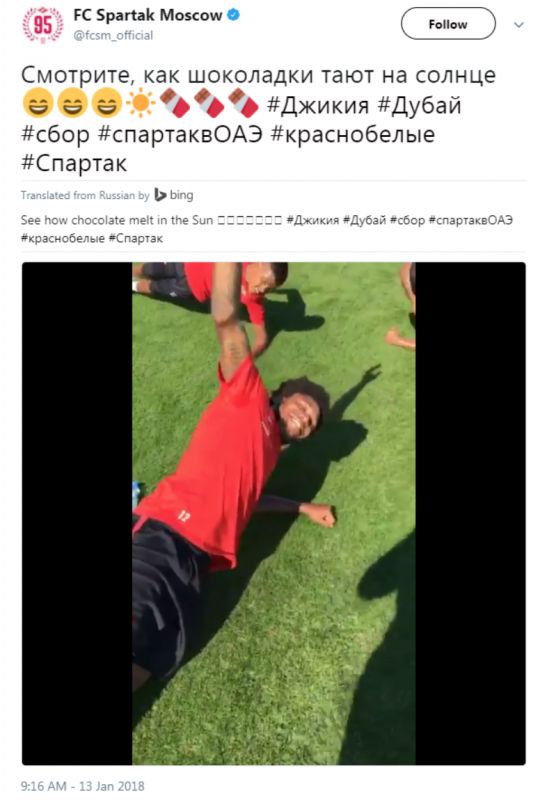 Included within the video is the Brazilian star Luiz Adriano who can be seen smiling completely oblivious to the backlash the video would go on to receive. Adriano joined from AC Milan one-year-ago and is likely to be distraught with the manner that the video was posted to social media in.

The Russian giants were in English side Liverpool’s Champions League group this season and narrowly missed out on qualification to the knockout stages finishing third in the group.

Understandably, football fans from across the globe were gobsmacked by the controversial post taking to twitter to vent their outrage.

‘See how Chocolate melts in the sun.’

This was tweeted by the official Spartak Moscow Twitter account. Just a reminder that the World Cup with be held in Russia in 6 months time. Disgusting. pic.twitter.com/UqnaU2Gcjn

There is something fundamentally wrong in Spartak Moscow. It’s truly unbelievable what is posted in OFFICIAL Twitter account. Truly disgusting. Shame on you, @fcsm_official! pic.twitter.com/YmVPUqPkEC

@kickitout Why do Black players ever play in Eastern Europe? The racism they are subjected to is akin to the US in the early 60’s. It’s disgusting. Spartak Moscow is disgusting #bbcfootball