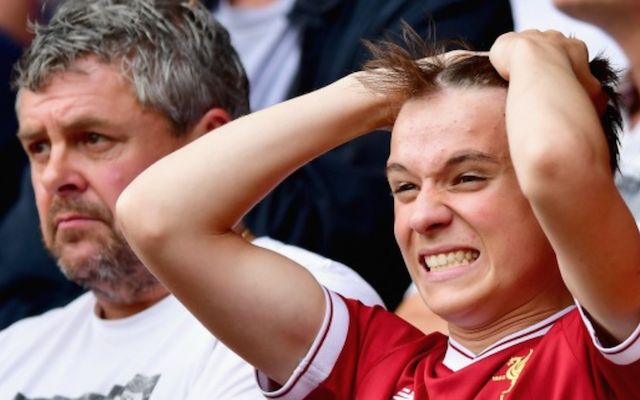 A Loris Karius blunder undid a superb Liverpool first-half performance against Manchester City and fans were quick to to blame the goalkeeper after his poor performance.

Jurgen Klopp raised a few eyebrows with his team selection ahead of the clash at Anfield with Premier Legaue leaders Man City as he opted to start Karius over Simon Mignolet.

Klopp’s decision looked to have paid off heading towards the break with Liverpool 1-0 up.

Alex Oxlade-Chamberlain put the Reds ahead on the ninth minute after a superb individual effort from outside the box beat Man City goalkeeper Ederson.

Liverpool looked to be heading into the break with the advantage but with less then five minutes remaining a Karius blunder allowed City to equalise.

Leroy Sane drove in from the left-flank and beat Karius at his near post with the German goalkeeper failing to prevent the effort.

Karius was certainly to blame for the equaliser and many were furious to see the Liverpool ‘keeper beaten at his near post.

Some fans even suggested the star should be sold…

Best half of the season ruined by karius

Karius diving for that shows how lost he is. Desperately need a new goalkeeper.

Karius is shite. Shouldn’t get beaten at the near post like that…. Also missing that magic in the final third, both Firmino and Salah look lost #LFC

Sell Migs and Karius, I’d rather play without a keeper than watch these two throw the ball in their net every bloody week

Might as well Give Danny Ward a chance surely. Sell Karius and Mignolet and buy Oblak I’m tired of these keepers costing us points

Karius is a fucking spastic. Sell him right away. He’s NEVER gonna be good enough.