If the speculation wasn’t enough, Arsenal fans have interpreted some social media activity as another sign that they could be signing Pierre-Emerick Aubameyang.

As noted by Sky Sports pundit Guillem Balague, the Gunners are said to fancy their chances of landing the Borussia Dortmund striker this month.

It comes with doubts hanging over Alexis Sanchez, as his contract runs out at the end of the season and so Arsenal would arguably be wise to cash in during January while they can rather than lose him for nothing.

With the prominence of social media in the world, it looks as though some Arsenal fans have interpreted Hector Bellerin’s latest Twitter and Instagram activity as another potential sign that they could be welcoming Aubameyang to the Emirates before too long.

As seen in the images below, Bellerin started to follow the Gabon international on both platforms, while he’ll be pleased that he got a follow back too as the pair will only now fuel the speculation further.

In addition, the tweets below show some Arsenal fans get very excited about the possible arrival of the prolific marksman, but others are still convinced that many are looking too much into it.

Either way, if Sanchez does leave, Arsenal have to act as with results on the slide and their best players moving on, it doesn’t paint a particularly positive picture… 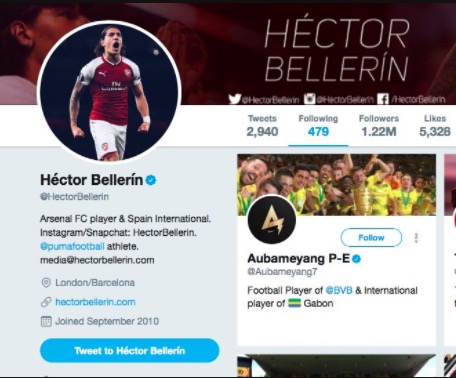 Bellerin has just followed Aubameyang on instagram. Time to watch every comp possible of him on youtube. #welcomeauba

@moleyfootball Some news about Aubameyang?
Bellerin just started following him on Instagram for 20min ago

Woah! Would love Aubameyang at Arsenal.
With exit of Alexis Sanchez & Walcott imminent,would be a great singing.

Aubameyang and Bellerin have both followed each other on Instagram #afc pic.twitter.com/mwXW252Xdp

Right so Bellerin has basically confirmed Aubameyang. Wonder what shirt number he will get. I want Malcom to get number 7. Aubameyang 14 would be class.