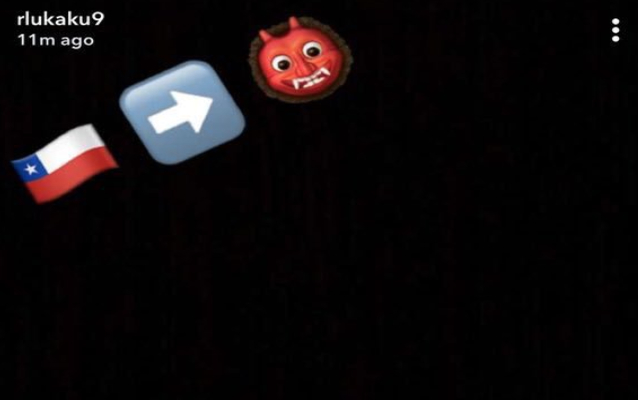 As noted by The Guardian, the Chilean international is said to be close to a move to Old Trafford after he was dropped from the Arsenal squad that faced Bournemouth on Sunday.

It appears as though Jose Mourinho has leapfrogged Man City rival Pep Guardiola in the race to sign the 29-year-old, and Man Utd now look on course to secure a deal.

To build further excitement, Lukaku had seemingly dropped the biggest hint yet that United expect to welcome Sanchez in the coming days, as he posted the update below on Snapchat.

With three emojis, the Belgian striker displayed a Chilean flag with an arrow pointing towards a devil, and while he later deleted it, naturally supporters were quick to take a screenshot first.

However, as seen below, there was a major problem with it all. It turns out that it isn’t his official Snapchat account, with fans clashing over the ‘update’ as some believe that it’s still on and likely to happen while others were a little angry that a fake profile had got the United faithful all excited.

Based on the Guardian report above though, it still sounds as though the Red Devils are closing in on their target, now it remains to be seen if a deal can be done this week and with or without a Lukaku update, it will be a major coup for Mourinho to beat City to the classy addition.

Lukaku posted this on snapchat before deleting in under a minute… pic.twitter.com/yncKbG4ADY

Snap has been deleted though…but we wait ??? #MUFC pic.twitter.com/FyyUqaIUXA

not his official snap

That account really is Lukaku’s loool did he just announce Sanchez ??