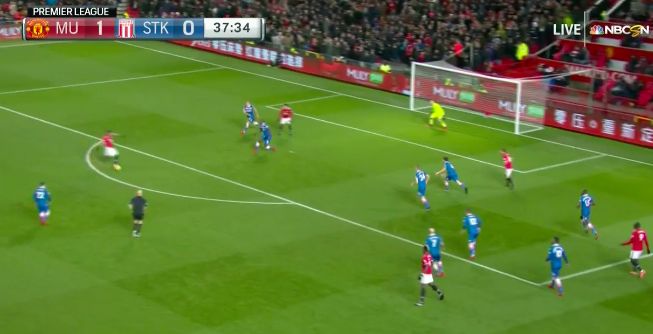 Anthony Martial sent a message to Alexis Sanchez over his place at Manchester United with a sublime finish to put this side 2-0 up against Stoke City tonight.

Paul Pogba found Martial superbly with a pass to his fellow Frenchman on the edge of the box, and he made no mistake with a cool side-footed finish into the top corner.

The 22-year-old may soon see his place in Jose Mourinho’s side come under threat from the potential signing of Arsenal star Alexis Sanchez, but he’ll take some dislodging with quality like this.

The Daily Mirror also linked Martial with a potential move to Arsenal as part of the deal for Sanchez to move to Old Trafford, though unsurprisingly it was reported that the club were not keen on such a proposal.

United could certainly be a fearsome attacking force if Sanchez ends up linking up with this lot any time soon.

Even Antonio Valencia’s scoring wondergoals tonight with his superb left-footed curler having opened the scoring earlier in the game.