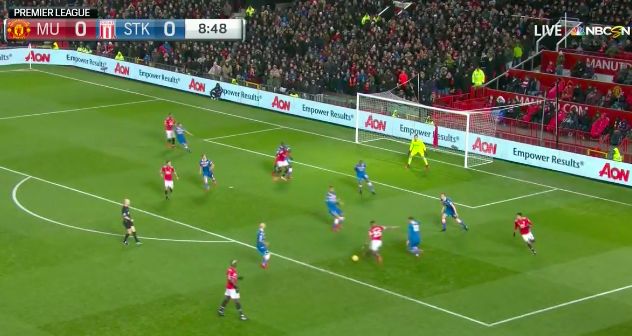 Manchester United right-back Antonio Valencia has given his side the lead against Stoke City in tonight’s Premier League clash – and it was an absolute beauty of a strike.

The Ecuadorian got forward to curl home a superb left-footed effort past Stoke goalkeeper Jack Butland, who stood no chance.

Valencia is known for being a bit of a one-footed player, so Red Devils supporters were shocked on Twitter to see him produce such a quality effort on his weaker left foot.

On a night that threatened to be all about the transfer market amid stories over Alexis Sanchez and Henrikh Mkhitaryan – who was excluded from the squad by Jose Mourinho tonight, Valencia has assured that the focus is now fully on the football.

Antonio Valencia has just scored a goal… with his left foot. Say your prayers. pic.twitter.com/L4m8KfK49u

TONY V SCORES ON HIS LEFT.

Since when does Valencia score with his left foot? ?? Beautiful cut in and curling strike! 1-0 #mufc #mulive #MUNSTK

Valencia shooting and scoring with his left foot, 2018 is getting out of hand already.

Who knew Antonio Valencia even had a left foot ? pic.twitter.com/RHVghWTV72