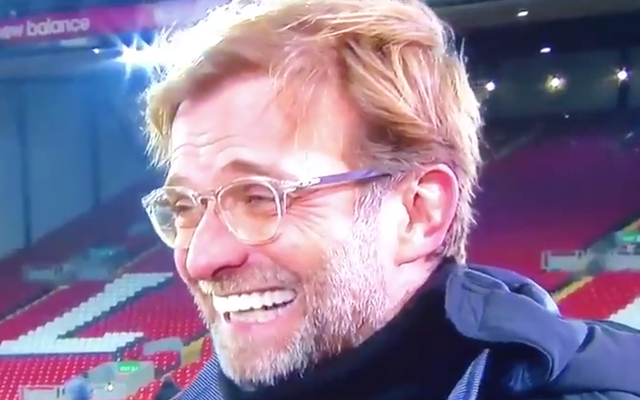 After Liverpool’s thrilling 4-3 win over Man City at Anfield on Sunday, Jurgen Klopp probably said what most of us were thinking.

Unfortunately for the German tactician, he said it on live TV during an interview with NBC, as although it was hilarious, it naturally required an apology for anyone who took offence.

A late City comeback threatened a dramatic finish to the game, but a second-half blitz from the hosts was enough to secure all three points in a fantastic game of football.

While some of the meetings between the top Premier League sides this season have failed to entertain, this certainly lived up to the billing as it was an exciting game full of attacking football as City lost their unbeaten league record.

The Liverpool boss went on to get more laughs out of pundits Graeme Le Saux and Lee Dixon as he tried to defend himself by suggesting that he thought it was fine to swear on US TV as he knows he can’t in the UK, but sadly for him it’s not alright for most TV networks in the middle of the day…

Still, yet another reason to love Jurgen!

Klopp drops the F bomb on American TV & his reaction is amazing ??? pic.twitter.com/uAIyIpO48q