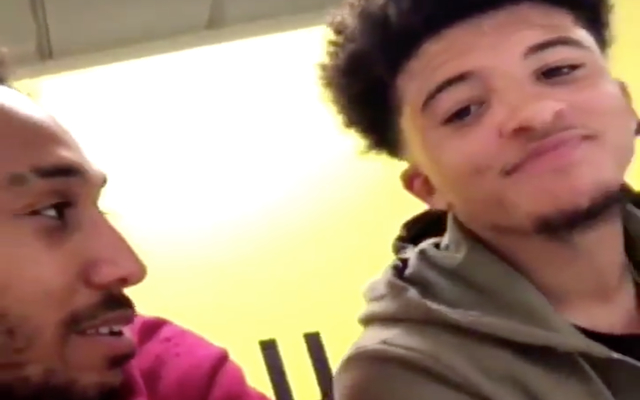 Borussia Dortmund striker Pierre-Emerick Aubameyang is being heavily linked with a move to Arsenal, and he’s either preparing for it or having fun with the speculation.

As per Sky Sports pundit Guillem Balague, Arsenal are prepared to splash out €60m on the prolific Gabon international, but are still waiting on the green light from Dortmund to allow the move to happen.

While that wait continues, Aubameyang has been busy on Instagram stories talking to youngster Jadon Sancho, formerly of Watford and Manchester City, who knows a thing or two about living in London.

It appears as though the 17-year-old Dortmund starlet has promised to show his teammate around the English capital, and it just so happens to come at a time Aubameyang is being paired with a move to north London.

Perhaps it’s a mere coincidence or the 28-year-old is just enjoying the speculation and is adding fuel to the fire, or it could be something entirely innocent.

Either way, as seen in the tweet below and the reaction from supporters, it’s only served to add further excitement to the possibility that Arsenal could be signing him this month.

Aubameyang has scored 141 goals in 212 games for the Bundesliga outfit, plundering in 40 in 46 outings last season which was his most prolific campaign yet.

While his potential arrival at Arsenal will come to replace Alexis Sanchez, it would be a stunning signing from the Gunners to fill a major void left behind by the Chilean international who looks set for a move to Man Utd, as per BBC Sport.

Video: Pierre-Emerick Aubameyang to Jadon Sancho on Instagram Live tonight: “Can you bring me to London one day?”. [@Ballzirkulation] #afc pic.twitter.com/F4Fcy8GnQZ

If you watch the whole video it shows Sancho filming himself then in the very end Auba gets hold of the camera and randomly asks that question fromSancho. It is interesting in the very least…….