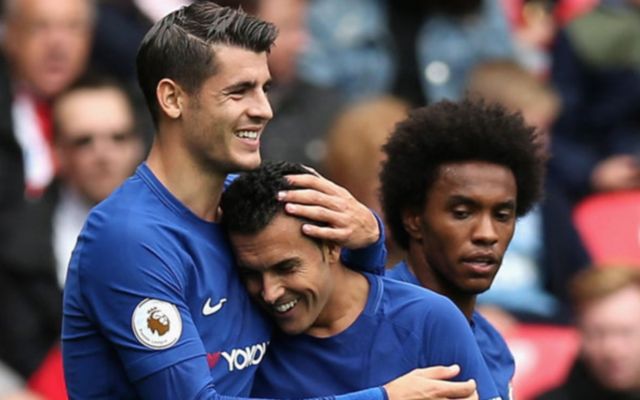 Chelsea fans were not happy with forward Pedro this evening, after the player was branded an “embarrassment” by fans after he was booked for diving in his side’s 1-1 draw with Norwich in the FA Cup.

The match was a very eventful one, with the home side taking the lead in the 55th minute, after Michy Batshuayi turned home a cross from Kenedy to put the Blues ahead.

The away side equalised in the 94th minute, after a superb cross from Tim Klose was turned home by Jamal Lewis to send the tie into extra time.

Pedro then received a second booking for a late tackle on Wes Hoolahan in the 117th minute, with the Spaniard’s first yellow card being for simulation earlier in the match.

Alvaro Morata was then shown a red card for two bookings, as the Spaniard was shown two yellow cards in quick succession as the home side finished the match with nine men.

Antonio Conte’s side converted all their penalties in the shootout, with Willy Caballero saving Norwich’s first spot kick as the Blues scraped in the next round.

After the match, fans took to Twitter to hammer Pedro for a dive midway through the second half.

Here are a few select tweets from fans slating the Spanish international for his dive in the match.

One of the worst dives I've ever seen from Pedro

Pedro an absolute disgraceful dive. Should be sent off the cheat!

BREAKING: Pedro has signed up for diving at the next Olympics.

Absolutely shocking from Pedro. Make it a mandatory red card instead for diving, cuts it out straight away. #CHENOR

Pedro, the genius will dive when the whole match is analyzed using VAR