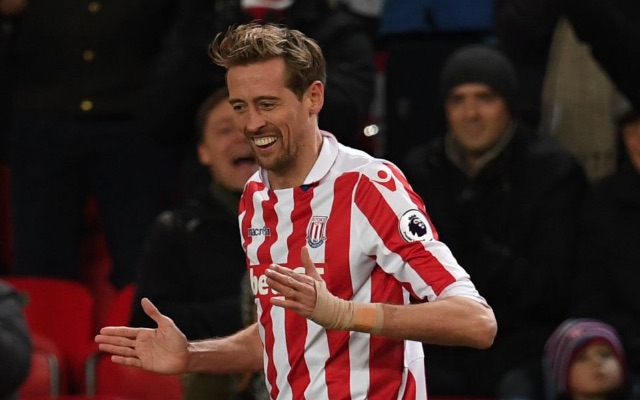 Chelsea were linked with a surprise move for Stoke City striker Peter Crouch on Thursday, and it’s fair to say it didn’t go down well on social media.

The 36-year-old stalwart has played for a whole host of different clubs, scoring 201 career goals in 690 appearances during spells for the likes of Aston Villa, Liverpool and Tottenham.

In turn, he can boast plenty of experience in the Premier League and a unique goalscoring threat given his aerial prowess and ability to hold up the ball, but nevertheless, it’s still a huge shock to see Chelsea linked with a move at this stage of his career.

According to The Telegraph, the Blues ‘have made inquiries’ as they seek an alternative to West Ham United’s Andy Carroll.

The reasoning behind signing another striker is understandable, as Antonio Conte’s men have managed to score just one goal in their last four outings in all competitions.

That’s simply not good enough for a side hoping to compete for major honours this season, and Alvaro Morata’s struggles in front of goal in particular have become a problem as he has now gone six games in all competitions without finding the back of the net.

However, it’s questionable as to whether Crouch is the solution, as although he’s a model professional and would give his all at Stamford Bridge to make an impact in any way he can in the final stages of his career, the fan reaction below pretty much says it all about the ambition connected to the possible move…

If we sign crouch I will officially stop watching Chelsea games ???how can we go from Drogba and Costa to Crouch? NOOOO ???

Chelsea fans seeing the Carroll deal fall through only to log on to Twitter this evening and see we’re in for Crouch. pic.twitter.com/TNaVBHn6zs

Surely we can tempt Drogba, Crespo or Anelka back rather than Crouch? What’s Kezman doing these days? #CFC