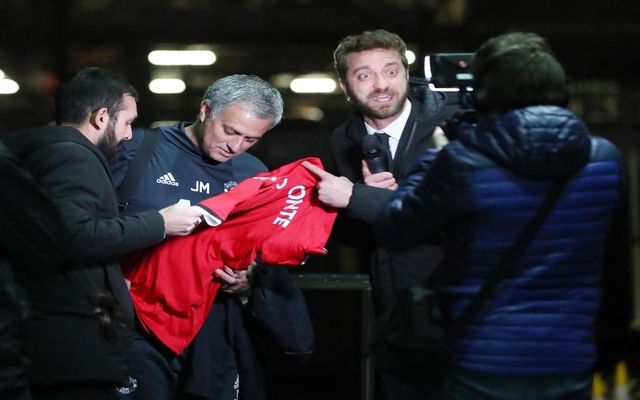 Man Utd boss Jose Mourinho has engaged in a heated and rather public war of words with Chelsea counterpart Antonio Conte in recent weeks.

As noted by The Telegraph, the pair have exchanged personal insults and digs at each other through the media at almost every available opportunity, firing up their rivalry even more having clashed on the touchline in previous meetings between the two clubs.

In turn, it sets up an intriguing meeting at Old Trafford on February 25, where it remains to be seen how the pair act and respond when put together in close proximity.

Nevertheless, the Portuguese tactician saw the funny side of this prank on Wednesday night, as he was caught out by Italian reporters who asked him to sign a United shirt for them.

As seen in the photos, Mourinho happily obliged, before they unveiled the name on the back of the jersey, which read Conte’s name and No.1.

Fortunately for them, it looks as though they caught him in a good mood, otherwise this could have ended very differently.

However, it came across well and shows that the 54-year-old does have a sense of humour despite it feeling like a very deep feud developing between the pair, and so the reporters in question left with a nice little memento from their trip to Manchester.

José Mourinho was pranked by signing a Man Utd shirt that had Antonio Conte’s name on. (Mirror) pic.twitter.com/AnPAKOJB33