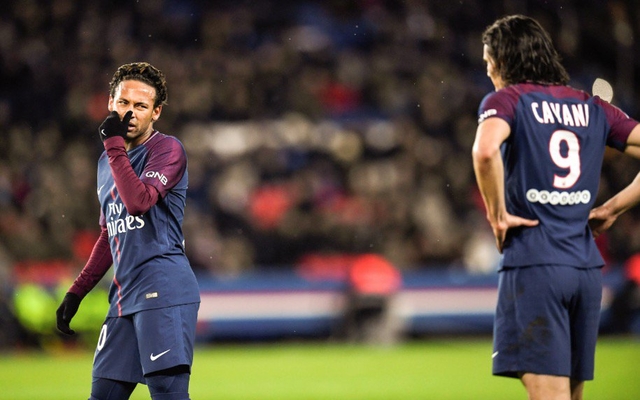 Paris Saint-Germain superstar Neymar scored four goals in his side’s 8-0 win over Dijon on Wednesday night, and yet he still managed to annoy supporters.

The 25-year-old has now scored 24 goals and provided 14 assists in 23 appearances for the Ligue 1 giants, as they remain on course for a trophy-laden campaign.

However, Neymar didn’t please everyone on Wednesday it seems, as noted in the tweet below from French football expert Julien Laurens, as the home faithful booed the Brazilian international as he look a penalty to complete his night’s scoring to deny teammate Edinson Cavani getting on the scoresheet again.

That’s because the Uruguayan forward is now one goal away from surpassing Zlatan Ibrahimovic to become the club’s all-time top goalscorer.

Having taken his tally to 156, he had the perfect opportunity to add another late on against Dijon in a crushing win, but Neymar was handed penalty-taking duty and so Cavani will now have to wait until Sunday to have an opportunity to score again when PSG take on Lyon.

Neymar is now the designated penalty taker for the French outfit, and so there shouldn’t be much of an issue made of it, following on from an on-the-pitch altercation between the pair earlier in the season.

However, there is an argument to suggest that he should have stepped aside to give Cavani the opportunity, but this ‘controversy’ could all be over in a matter of days as it surely won’t take him much longer to add to his tally, having scored 26 goals in 28 games so far this season.

Neymar is upset though because the Parc des Princes booed him and chanted “Cavani, Cavani” when the Brazilian took a late penalty instead of letting the Uruguayan take it…

Controversy in Paris tonight despite PSG’s 8-0 win over Dijon, which included a Neymar quadruple. The Brazilian was roundly booed for not allowing Edinson Cavani take the penalty that could have made him PSG’s top-scorer of all-time.