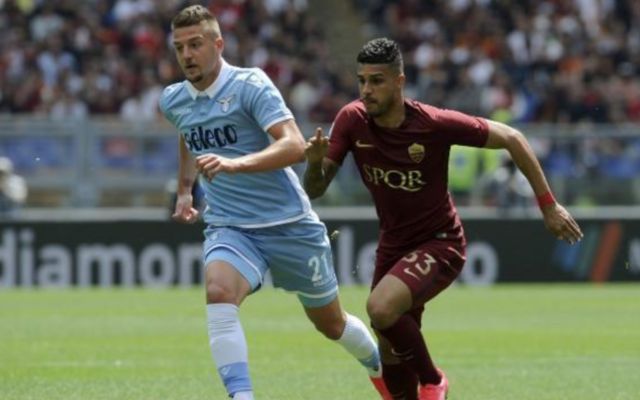 Chelsea are reportedly on the verge of signing Roma left-back Emerson Palmieri, as it’s claimed in Italy he has agreed on personal terms with the Blues.

The 23-year-old joined the Italian giants in 2015 having initially broken through in his homeland with Santos, going on to since make 47 appearances for the Giallorossi.

He has yet to return to full fitness and top form after suffering a serious knee injury last season, but according to Tuttomercatoweb, it’s claimed that hasn’t been enough to put Chelsea off as personal terms have been agreed between the two parties.

It’s suggested that the Brazilian ace will pen a four-year deal worth €2.5m per season without bonuses, although there is no agreement on a transfer fee as while Chelsea have put a €20m offer on the table, it’s reportedly still €5m short of what Roma want.

In turn, it remains to be seen whether or not that stumbling block can be overcome, but it looks as though Palmieri is all set to sign for the Blues.

His arrival at Stamford Bridge would be crucial for Antonio Conte, as the Italian tactician currently has a worrying lack of competition and cover in the left-back or wing-back position.

Marcos Alonso has made 30 appearances already this season, regularly completing 90 minutes when he features, and that is surely not sustainable for the Spaniard from now until May.

In the event that he was to pick up an injury, that would raise a real issue for Chelsea, and so signing Palmieri in January will offer them a different option in that department.

With Aleksandar Kolarov enjoying an impressive campaign coupled with Juan Jesus being able to play on the left if necessary, it seems like a decent bit of business from Roma’s perspective too.