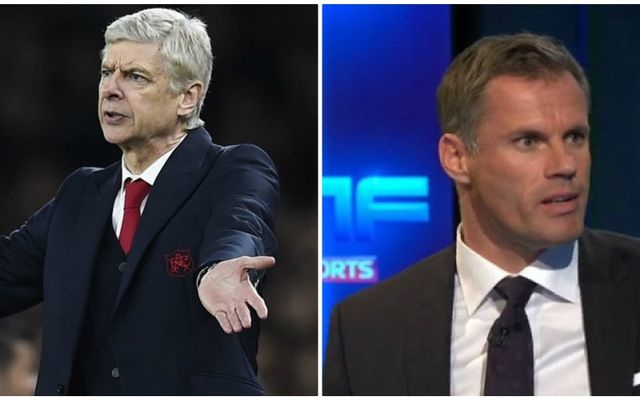 Jamie Carragher believes he has identified the perfect successor for Arsene Wenger at Arsenal, and it’s hard to disagree with his pick.

The 68-year-old deserves a great deal of credit and respect for being in the job so long and bringing so many positives to the north London giants since he was appointed over 20 years ago.

However, the fact remains that he hasn’t won a Premier League title since 2004, while the FA Cups that have followed since simply aren’t enough for a fanbase who demand much more.

In turn, the Gunners have arguably settled into a position where their ambitions and expectations have fallen, with a fight for a top-four finish now the best that they can hope for again this season.

Wenger signed a new contract with Arsenal last summer and so there doesn’t appear to be a change coming any time soon, but Carragher has suggested that Antonio Conte would be the perfect man to go into the Emirates, ruffle some feathers and really kick-start Arsenal’s pursuit of major honours again.

“A club desperately in need of Conte’s persona, who would send a rocket through every department of their institution and instantly change perceptions. That club is Arsenal,” he sensibly wrote in his Telegraph column.

“I can imagine no more suitable replacement for Arsene Wenger than Conte. It would be one of the most astute managerial appointments in Premier League history.”

“Arsenal should do everything in their power to ensure it is a short tube ride to his next destination.”

Conte is undoubtedly a different type of manager, as his passion and fiery nature on the touchline shows every weekend, and his track record speaks for itself with success at Juventus before winning a league title in his first season with Chelsea.

Carragher is spot on in suggesting that the Italian tactician would really fire things up at the Emirates, demanding more of the players and being a little more ruthless than Wenger has perhaps been.

Chelsea’s loss could certainly be Arsenal’s gain if an exit materialised at the end of the season, but time will tell if Conte firstly leaves Stamford Bridge and how long Wenger stays in north London.