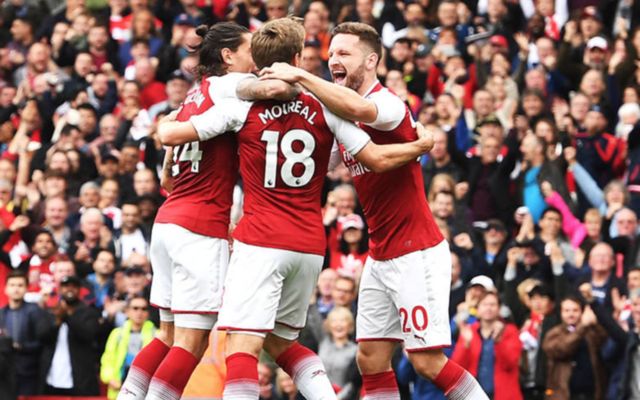 Arsenal fans have taken to social media at half time of their match against Crystal Palace to heap praise on the head of Spanish defender Nacho Monreal after his first half performance against the Eagles.

The Gunners opened the scoring in the sixth minute, after a header from Monreal went past Wayne Hennessey to put the home side 1-0 up.

The Gunners then bagged their third in the 13th minute, as French international Laurent Koscielny headed home to give the north London side an almost unassailable lead.

Arsenal then effectively wrapped up all three points in the 22nd minute, after a back heel from Mesut Ozil allowed Alexandre Lacazette to fire the ball home.

At half time, Arsenal fans took to Twitter to wax lyrical about Spanish left-back Nacho Monreal, after he bagged a goal and two assists before being taken off in the 33rd minute.

Here are a few select tweets from fans praising the former Malaga ace on his performance in the first 45 minutes.

Monreal with a goal and two assists from LW. Wouldn’t have put him first in line as the Sanchez replacement, but I stand corrected

Monreal has come back from injury, scored one, assisted two, and now leaves to go home and have a nap. Job done.

Monreal going off. "My work here is done." He's only played 33 minutes but must still get MotM.

Everyone keeps talking about kolasinac on the bench , Monreal proves sometimes how underrated he is ?

Monreal forced off for Ainsley Maitland-Niles. It's been a pretty impressive cameo for him.