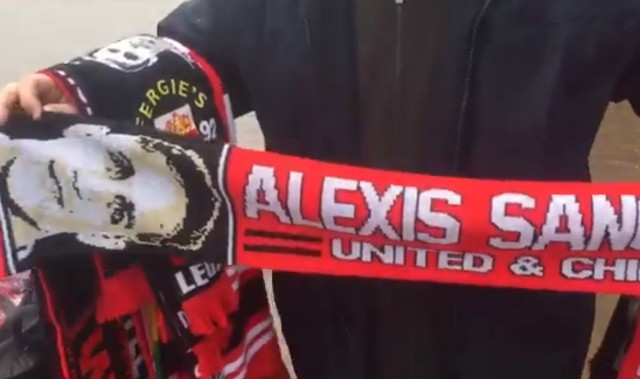 Alexis Sanchez Man Utd scarves are already on sale at Old Trafford, it would seem, as fan account Full Time Devils pick up pictures of merchandise with the Chilean’s face on.

Gianluca Di Marzio earlier reported that Sanchez’s move to United and Henrikh Mkhitaryan’s switch to Arsenal were both in the final stages of completion, so an announcement could be imminent.

However, it has not yet been made official and so these fans may want to be a little careful about tempting fate with this kind of behaviour.

While these are surely not official club shop scarves, one fan seems to be selling them and has presumably gone through the trouble of getting them made.

This could look very embarrassing if the Sanchez transfer does not end up going through, though that does admittedly seem unlikely at this advanced stage of negotiations.

United take on Burnley in the Premier League today but have not completed their new signing in time for him to be able to play for his new club this weekend.

Meanwhile at Arsenal…everything must go…