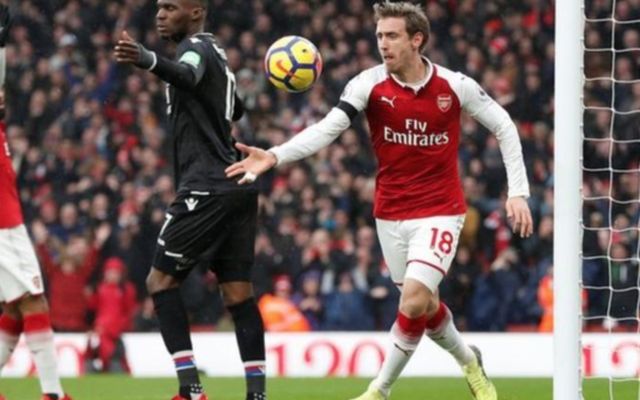 Arsenal had Nacho Monreal to thank this afternoon, as the Spaniard bagged a goal and two assists in the Gunners’ 4-1 win over London rivals Crystal Palace at the Emirates.

The home side opened the scoring in the sixth minute, after a corner to the back post was headed in by Monreal to give Arsenal the perfect start to the match.

Arsenal then found themselves leading 3-0 in the 13th minute, after a corner was scrambled home by Laurent Koscielny.

Alexandre Lacazette then found himself on the scoresheet, as the striker fired a powerful effort past Wayne Hennessey after being put through by a beautiful back heel from Mesut Ozil as the Gunners added a fourth.

The Eagles then found a consolation in the 78th minute, after midfielder Luka Milivojevic fired home from a corner to deny the Gunners of a clean sheet

The result now means that Arsenal are now only two points behind their bitter rivals Spurs in the race for Champions League football.

There’s only one contender for this award today….

Arsenal ace Monreal was the difference maker today, as the former Malaga star directly contributed to three goals for the home side as they ran riot against the Eagles.

Monreal’s vision and ability to not only score, but also create, in the match was apparent, and the defender is fully deserving of the man of the match award.

This tweet sums up the player’s performance this afternoon

Monreal going off. "My work here is done." He's only played 33 minutes but must still get MotM.

This from Opta shows that Arsenal have more to their game than just trying to pass it in!

27 – Since the start of last season, Arsenal have scored 27 headed goals in the Premier League, more than any other team. Nut.