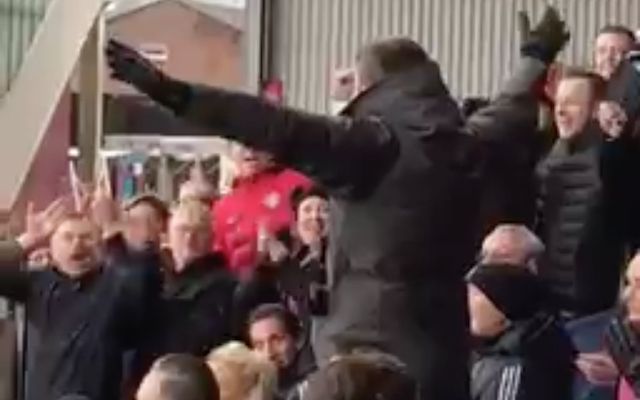 Michael Carrick sat amongst Manchester United fans in the away end at Turf Moor as he cheered on his side against Burnley.

Carrick was sat next to his son who both watched on as the Red Devils clinched a 1-0 win over Burnley after a 54th minute winner from Anthony Martial.

Fans understandably could not believe their luck as the United midfielder took his seat amongst the United supporters.

While Carrick perhaps may have been hoping to keep a low-profile he was quickly identified with United fans sat around him singing his name throughout the 90 minutes.

The former England international even took it upon himself to lead some of the chants as can be seen in the video below.

3 points ?? My little man made his debut in the away end today. He was all over it. “Please can we come next week Dad?”?? #AwayDays #RedArmy pic.twitter.com/o0InSvsr8X

Carrick is set to retire at the end of this season with Sky Sports reporting that the legend will go on to take up a role within Jose Mourinho’s coaching set-up at Old Trafford.

The midfielder has clinched every club competition available during his time at Man United and once again proved today that he’s a class act.