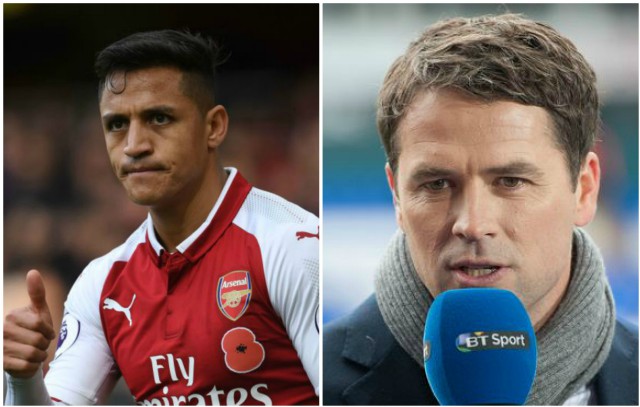 Alexis Sanchez is set to complete his move to Man Utd, but one former Red Devil doesn’t believe he’s making the right decision for his career.

The Chilean international arrived for his United medical at Carrington on Sunday, as per Sky Sports, with Henrikh Mkhitaryan moving in the opposite direction to join Arsenal.

Given his impact at Barcelona previously and Arsenal last season, the 29-year-old will be a major addition to Jose Mourinho’s squad, as he will try to bridge the gap to Manchester City in the Premier League and help Man Utd secure success in Europe.

However, while Michael Owen doesn’t have an issue with Sanchez choosing the bigger financial offer from the Red Devils over rivals City who were also keen, he isn’t convinced that the former Arsenal man is making the right move for his career.

“There is clearly one major reason why Alexis Sanchez is choosing Manchester United over Manchester City,” he wrote in his Daily Mail column. “Naturally, as a footballer he wants to maximise his earnings but as an attacking player, I’m still surprised he would opt for Jose Mourinho over Pep Guardiola.

“As an attacking player, he must know that he is going to be asked to temper his game.

“Maybe if I was a defender, I might prefer Mourinho but at United Sanchez will eventually conform to what Mourinho wants and that will restrict his performance.”

In his defence, Owen makes a fair point that ultimately Mourinho does adopt a more pragmatic approach compared to the likes of Pep Guardiola, Jurgen Klopp and Mauricio Pochettino.

That’s reflected in the way his teams play, as they are often defensively sound and cautious while there is still room for the attacking players to shine and win games.

It arguably goes a little too far on occasion, such as in away games at Liverpool and Chelsea earlier this season, with Man Utd clearly adopting a more defensive approach, and that is where criticism is fair as given the strength of the current squad, the history and prestige of the club and its culture of playing expansive football, more is undoubtedly expected.

However, Mourinho’s trophy haul can’t be argued with and so clearly his methods work. Many of the supporters below weren’t impressed with Owen’s point, and they made it known with their responses as time will tell if Sanchez has made the right decision…

This man is trying his best to ease his way back in with Liverpool fans, guess what fella both sets of fans hate you ? what a ?

Get a grip Michael – just because Man City have played well for half a season doesn’t mean all attacking players must sign for them. Stick to the horse racing #mufc

You’re forgetting something , he’s not looking to develop , I understand people improve even at 29, but this lad is a polished article hungry to win , United is the perfect place and he’ll have an undisputed position . Don the #7 shirt , and rid of the curse you implanted on

Ask yourself this. Could Pep win back to back European trophies with Pedro Mendes and Benni McCarthy in his squad?? Honestly!

Drogba? Milito? Pandev? @eto’o? Just to name a few Michael. I understand the Pep style argument but people are making Jose out to be a villain, which given he’s won more than Pep is disrespectful

Drogba? Milito? Costa? Another fact is you were washed up by the time you joined #MUFC . That entire article is jealousy on your part.

Do your research. You’re just following a lazy, tabloid led narrative based on nothing. It’s embarrassing.