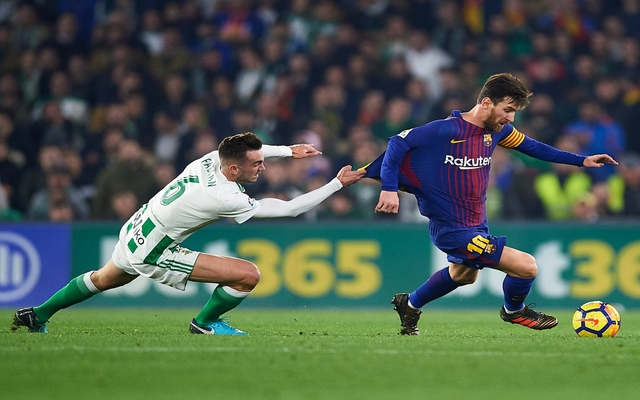 Barcelona secured a 5-0 win over Real Betis on Sunday night, and Lionel Messi was at the forefront of their victory with a double for the visitors.

The game was goalless at the break, but after Ivan Rakitic opened the scoring, Messi bagged a brace along with Luis Suarez as the Catalan giants ran riot and re-opened an 11-point lead at the top of the La Liga table over nearest rivals Atletico Madrid.

As for their Argentine icon, he has now scored 19 goals and provided 10 assists in 20 league outings so far this season as he continues to deliver time and time again.

Unsurprisingly, Barcelona supporters and neutrals were in awe of what they witnessed from the 30-year-old, with former players, pundits and fans all taking to Twitter, as seen below, to react to his latest masterclass.

From his clinical finishing to exceptional close control and skills, Messi displayed it all on Sunday night and for those tuning in, they witnessed yet another brilliant performance while even the Betis fans applauded him, as noted below.

With over 500 goals for the club in just over 600 appearances, coupled with a huge trophy haul which includes eight La Liga titles and four Champions League trophies to name but a few, Messi has truly established himself as one of, if not the best ever, to play the game.

There’s no doubting what the fans below think…

There are no words to describe how good Messi is. An absolute joy to watch. https://t.co/wxDo8tYlil

Next year Messi will win his 10th league title. He’ll (only) be 31 years old. Unbelievable dominance. The Messi era.

When anyone tells you Ronaldo is better than Messi, show them this and walk away https://t.co/sH4zN6ThIC

Betis fans applauding that last (ludicrous) but of skill from Messi

Anyone who still thinks there is a better footballer on the planet than #Messi is absolutely clueless. He’s a joke. In a class of his own.

Football will never be a fair sport as long Lionel Messi is playing it.

If you’re ever sad just remember the world is 4.543 billion years old and you somehow managed to exist at the same time as Lionel Messi. pic.twitter.com/NBnun0LkTY

Imagine calling yourself a “football fan” and then thinking that Ronaldo is better than Messi. Seek medical help ASAP.

Thank God that I was born in Messi’s era. Lucky and privileged to watch him play. The best ever ?? pic.twitter.com/xohHDZureG