It’s Monday and BBC pundit Garth Crooks is back with his Premier League team of the weekend which has a strong Chelsea contingent this time round.

Despite the fact that Swansea City take on Liverpool on Monday night, Crooks has continued without taking that game into consideration, as he does with every Monday game.

In turn, Chelsea quartet Willy Caballero, Victor Moses, Willian and Eden Hazard form the backbone of the side, with the outfield trio all getting on the scoresheet in the comfortable 4-0 win over Brighton.

Caballero deserves credit too for stepping in for the injured Thibaut Courtois and performing well, and it remains to be seen whether or not Antonio Conte has a selection headache ahead when the Belgian international returns to action.

Meanwhile, Harry Maguire gets the nod in a back three after a commanding display for Leicester City, while despite being forced off with an injury, Nacho Monreal helped himself to a goal and two assists as Arsenal ran riot early on against Crystal Palace.

Mesut Ozil was a joy to watch in that win and so he is also included in Crooks’ line-up, while Joe Allen and Kevin De Bruyne complete a midfield four after playing starring roles for Stoke City and Manchester City respectively.

Sergio Aguero’s hat-trick ensured that Man City maintained their healthy lead at the top of the Premier League table as he tormented Newcastle United. With Gabriel Jesus currently out injured, the responsibility of scoring goals regularly will largely be on the Argentine’s shoulders, and he certainly enjoyed himself this past weekend.

Riyad Mahrez completes the XI after his role in the win over Watford, and so overall, there aren’t too many complaints about the personnel that make Crooks’ team this week as a case can be made for all.

However, with Victor Moses in a back three and Ozil out wide on the left of a midfield four, there could arguably have been a bit more work from Crooks put into the formation and system to make it work rather than sticking players in random slots.

Nevertheless, it’s difficult to disagree with too many choices, while Liverpool and Swansea players will hope to prove that they deserved a bit more patience with the weekly column going out after Monday night’s game.

Based on the reaction from some readers below, they also took issue with Crooks and his placing of specific players in his 3-4-3. 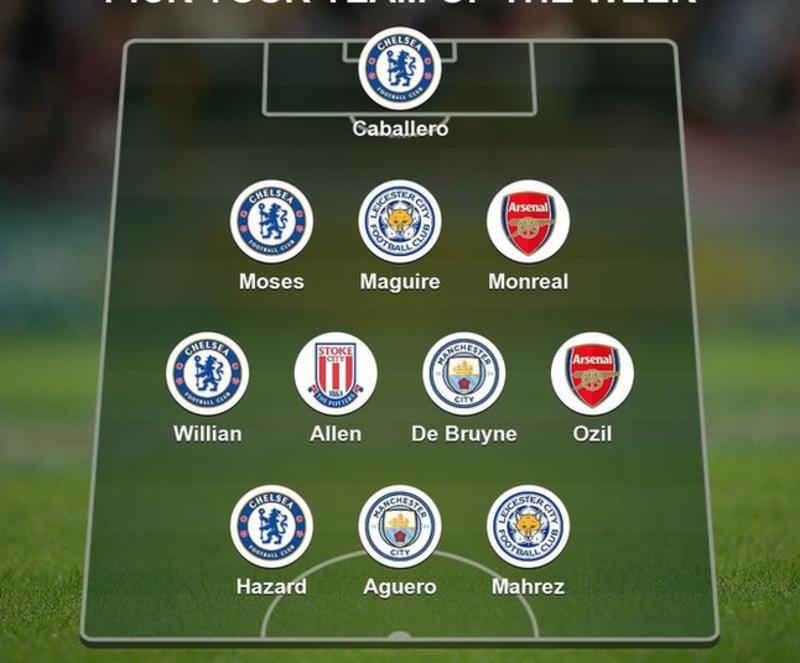 Moses as centre-half? Ozil as wing-back?

Moses as a CB in a 3 man defence? Ozil as a wing back? Caballero? Hazard and Mahrez as wide strikers? What? Seriously? Why does this man get to voice his opinion? This team makes absolutely no sense and doesn’t even have the best players of the week in it!