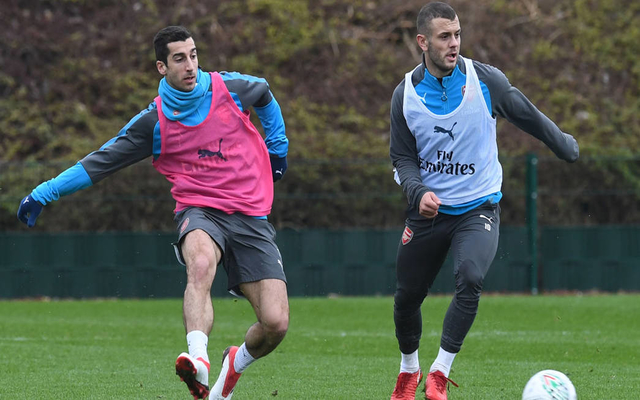 Arsenal have revealed that new signing Henrikh Mkhitaryan will wear the No.7 shirt at the Emirates following his move from Man Utd.

The 29-year-old was officially unveiled as an Arsenal player on Monday evening, with The Guardian noting how Alexis Sanchez moved to Manchester United in a swap deal involving the pair.

While it has since been confirmed that Sanchez will wear the No.7 shirt at Old Trafford, the Gunners have now revealed that Mkhitaryan will take his old jersey number as he took part in his first training session with his new teammates on Tuesday.

The very first pictures of our new No 7?? in training #MKHITAR7AN ? https://t.co/veUGBq1FcH

Mkhitaryan joins an illustrious group of players to hold the No.7 jersey, including the likes of Liam Brady, David Rocastle, David Platt, Robert Pires and of course Sanchez.

He’ll now hope to live up to expectations, as Arsene Wenger will undoubtedly expect him to be a creative hub in the side and to help fill the void left behind by Sanchez in the final third.

Given his technical quality on the ball, his creative class and flair, it’s expected that the former Borussia Dortmund star will fit in perfectly with the style of play developed at Arsenal.

However, fans will want to see it on the pitch and judge it for themselves to determine whether or not they’ve got another class act in the squad to link up with the likes of Mesut Ozil and Alexandre Lacazette to make them a real attacking threat on a consistent basis.