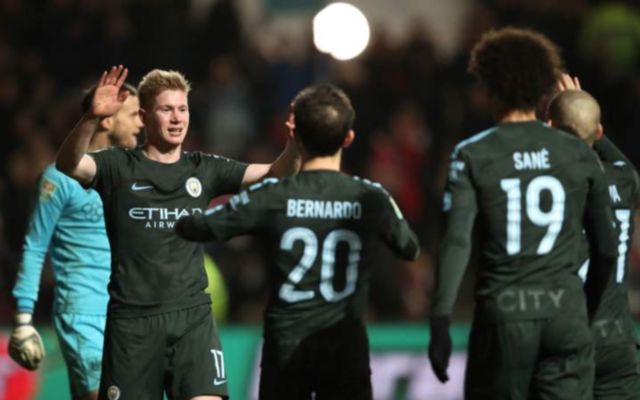 Man City beat Bristol City 3-2 at Ashton Gate tonight as Pep Guardiola’s side secured their place in the final of the 2018 League Cup.

City opened the scoring through a goal from Leroy Sane after some fine work from Bernardo Silva, with striker Sergio Aguero doubling their lead just after half time to put the away side firmly in the driving seat.

The home side clawed one back through Marlon Pack in the 64th minute, and then found a second in the 94th minute from Aden Flint, however a goal from Kevin De Bruyne just seconds later saw City book their place in the final with a win.

De Bruyne’s pass for Aguero’s goal was sublime, with the player himself getting in on the act in the dying minute to wrap a fine performance for the midfielder.

This tweet shows just how good De Bruyne was this evening

De Bruyne was absolutely first class tonight. I know it Championship opposition, but he is SO dominant in midfield. Nobody compares to him at the moment. Nobody.

This from Squawka shows just how good De Bruyne has been this season, and he certainly showed that tonight!

Kevin De Bruyne has now assisted more goals (14) across all competitions than any other player in the Premier League.

Sane once again coming in clutch for City. Good time to remind all of you that the top reds still think Marcus Trashford is better than him.

Sané has looked so much better with Zinchenko playing at left-back. He seems to thrive and drive in space more regularly compared to when Delph was behind him.

Who needs Sanchez when you have Sane.

Leroy Sane is the best left footed player in the league