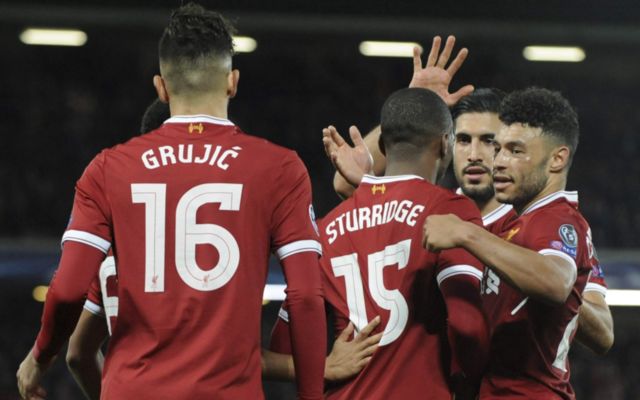 Liverpool have reportedly narrowed down Daniel Sturridge’s options this month, as he continues to be linked with a move away from Anfield.

It’s been another struggle for the 28-year-old again this season, as he has been limited to just 14 appearances in all competitions, with a combination of injuries and competition for places holding him back.

In turn, once again it has led to question marks over his future on Merseyside as he’ll want to play regularly and with Sadio Mane, Roberto Firmino and Mohamed Salah firing as they are this season, it’s questionable as to whether he’ll get that at Liverpool.

It’s claimed by the Liverpool Echo that the race for his signature is heating up, with Roma now potentially swooping for him if Edin Dzeko completes his reported move to Chelsea.

Perhaps the biggest problem though is that the report goes on to add that Liverpool want £30m for the England international, while the the likes of Sevilla and Inter only want him on loan initially, as per the Echo.

The situation could change if Roma are armed with the funds from the sale of Dzeko, but that’s still a stretch at this point as Sturridge’s injury record and lack of playing time this season will surely put any club off paying £30m until he can prove his fitness and form at a high level.

According to Guillem Balague though, as per his YouTube video below, the equation is pretty simple. He’s claimed that Liverpool have essentially told Sturridge to accept the Inter escape route, as the Italian side could pay more for the temporary switch.

“The way that Liverpool put it to Sturridge is ‘it’s either Inter or you stay’. I believe Sturridge’s representatives have met Inter. The idea is to have him on loan, with no obligation to buy.

“Sevilla is exactly the same. I think Inter are paying more for the loan deal.”

Sturridge may well still hold hope of making the World Cup in Russia this summer, and so for his short-term future, a January exit looks crucial if he is to play regularly and prove himself.

The long-term picture at Liverpool doesn’t appear to be much more positive, but it remains to be seen whether or not the Reds receive an offer that they deem acceptable.