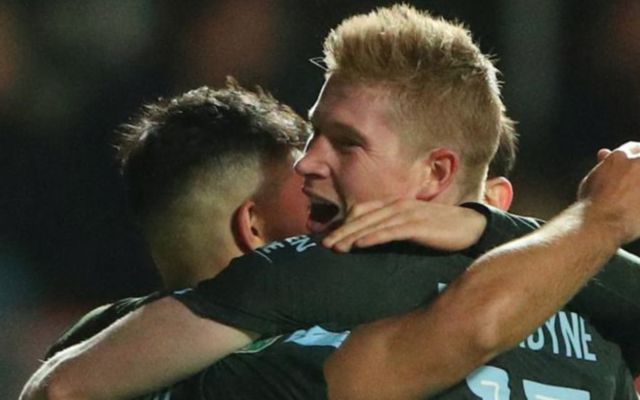 City opened the scoring through a strike from Leroy Sane following persistent closing down from winger Bernardo Silva.

Striker Sergio Aguero then doubled his side’s lead just after half time, with the forward burying his effort following a fantastic ball from De Bruyne.

The home side then pulled two goals back from Marlon Pack and centre-back Aden Flint, however a goal from De Bruyne right at the depth sealed a place in the final for Guardiola’s men.

Following the match, Belgian international De Bruyne was showered with praise on social media following his performance against the Championship side tonight.

Here are a few select tweets from fans praising the former Chelsea man for his performance this evening.

De Bruyne was absolutely first class tonight. I know it Championship opposition, but he is SO dominant in midfield. Nobody compares to him at the moment. Nobody.

De bruyne is absolute class man! What a player!

De Bruyne’s manipulation of the ball to work it on to his right foot to make the pass, was magnificent. Just one of his many touch’s of class tonight. Majestic.

Biggest transformation in Kevin De Bruyne is his athleticism. Covers every blade of grass now & his quality is second to none. Superstar!!