If we needed further proof of the financial strength of the Premier League, then the Deloitte Money League is it as Man Utd lead a strong contingent in their rankings.

The top 20 clubs in terms of revenue generated for 2016/17 have been released by the financial experts, with Man Utd topping the charts with £581m revenue, as noted by Sky Sports.

That’s the 10th time in the last 21 years that the Red Devils have come top of the pile, narrowly edging out Real Madrid to top spot this time round with Barcelona not too far behind in third.

From that point onwards though, there is a common theme running through the rest of the 20 sides included in the findings, with Man City, Arsenal, Chelsea, Liverpool, Tottenham, Leicester City, West Ham United, Southampton and Everton all making the cut to ensure there’s a strong English presence.

Beyond the English representatives, there are three clubs from Germany, Spain and Italy respectively, although there is no place for AC Milan for the first time since the findings started as they continue to struggle.

The Italian giants returned to European competition for the first time since 2013 this season, but after years of struggles and mid-table mediocrity in Serie A, they have dropped out of the top 20 which will be a source of concern for them.

Nevertheless, the sheer number of English clubs and the money they bring in coupled with the gulf between them and most of their European rivals shows the state of the playing field, and goes some way to explaining the difference in transfer fees and salaries being offered by Premier League sides.

Real Madrid, Barcelona and Bayern Munich are certainly leading figures in that regard too, as the numbers and graphic below would suggest, but it’s still quite the gap for most. 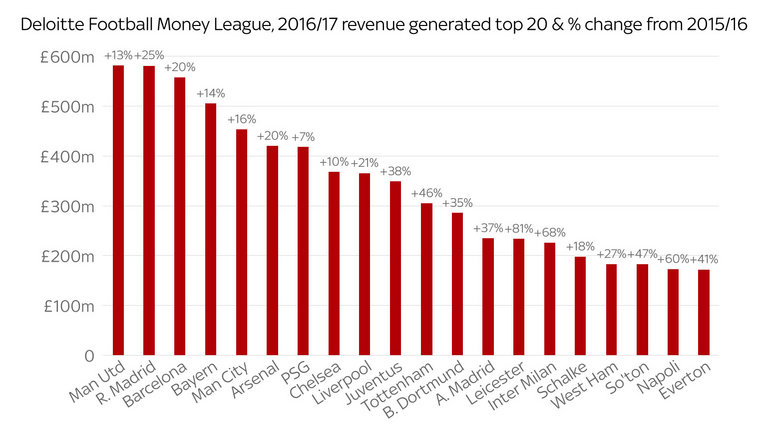