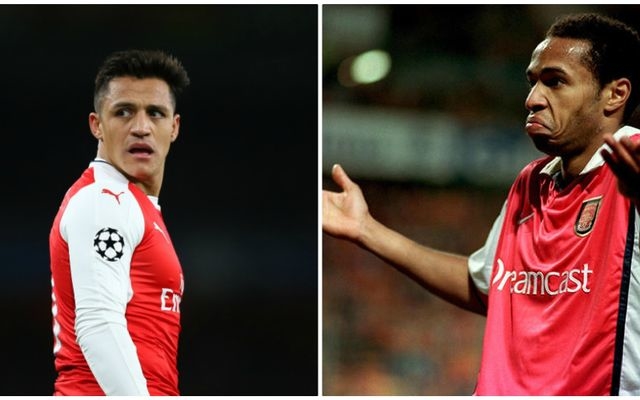 Alexis Sanchez completed his move to Man Utd on Monday, and he may well have left an Arsenal legend in a big hole after his comments in an Instagram post.

The 29-year-old moved to Old Trafford in a deal that saw Henrikh Mkhitaryan move in the opposite direction to join the Gunners, with both clubs officially announcing the deal, as per BBC Sport.

However, one aspect of Sanchez’s farewell has angered some supporters, as he claims to have had a conversation with Thierry Henry and dropped a hint that perhaps he was leaving the club for the same reason as the Frenchman who moved on to join Barcelona after a glittering spell in north London.

‘There are people (former club players) who have spoken with no knowledge of what happens inside the club and cause damage,” he noted in the post seen below.

‘I remember today, a conversation I had with Henry, a historic Arsenal player, who changed club for the same reason and today is my turn.”

As seen in the tweets below, some supporters are far from impressed with Henry as they’ve perceived it as a discussion to support Sanchez’s decision to leave north London to go on and further his career by winning more trophies, while this isn’t the first controversy the Frenchman has been involved in as mentioned by one of the users below.

Given what he did for the club, scoring 226 goals in 369 games, winning two Premier League titles and two FA Cups during a seven-year spell which also included the ‘Invincibles’ year, it seems a bit harsh.

However, it has been a build-up of issues, and it seems some supporters want drastic action…

Quiero agradecer al Staff Técnico, al equipo médico, a todos los compañeros con los que compartí muchas cosas lindas para el club y en especial a todas esas personas que no se ven en las portadas, pero que sin ellos nada seria posible, que son los que te preparan la comida y te cuidan día día, los que nos mantienen los zapatos limpios y campos de fútbol en las mejores condiciones para entrenar. Mil gracias a Ustedes por ayudarnos a mejorar cada día. Gracias por tanto cariño ?. Hay personas (ex jugadores del club) que han hablado sin conocimiento de lo que ocurre en la interna y causan daño. Debo decir que siempre me entregué al 100%, hasta el último día, en que le pedí al Mister estar con el equipo, por que quería ser un aporte. Recuerdo hoy, una conversación que tuve con Henry, un histórico de Arsenal, que cambió de club, por la misma razón que hoy me toca a mi. Gracias por todo Gunners ! I want to say thanks to the Technical Staff, to the medical team and all teammates with whom I shared many nice things for the club and especially those people who do not see themselves on the covers, but without them nothing would be possible, which are there to prepare food for us and take care of us day by day, those who keep our shoes clean and the grass in the best conditions. Many thanks to you for helping us to improve every day. Thank you very much ?. There are people (former club players) who have spoken with no knowledge of what happens inside the club and cause damage. I must say I always gave 100%, until the last day, when I asked to the Mister to be in the team, because I wanted to be a contribution. I remember today, a conversation I had with Henry, a historic Arsenal player, who changed club for the same reason and today is my turn. Thanks for everything Gunners! All we achieved and the good moments that I gave to the club, I want to dedicate it to the fans, they are the most important. Thanks for every time you sing Alexis Sanchez Baby

Henry speaking to Alexis about leaving the club for better things ? Not my legend.

This season alone, Thierry Henry has attempted to motivate Kane prior to the NLD, given Bournemouth a pep talk before playing us and advised Alexis on leaving the club. Regardless of his exceptional playing career, he’s really tainting his legacy at the club since

Henry is a snake you know, he’s out here training Hazard at Belgium, milly rocking with Pogba and Martial and telling Alexis to leave. Fake legend

Thierry Henry is the real snake?? can somebody plz take his statue down????

From today onwards will never call theiry Henry an arsenal lagend….he is the real snake worst than RVP and Ian wright.