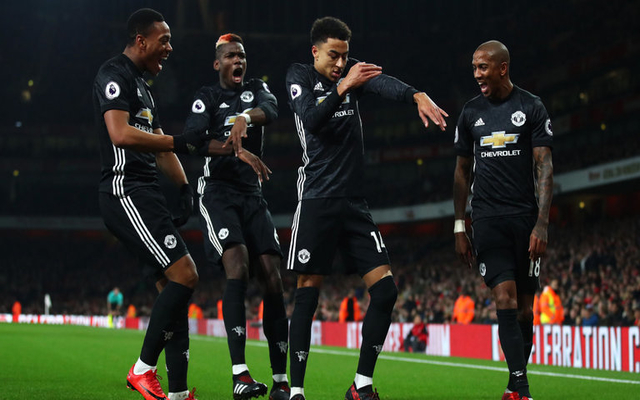 Alexis Sanchez is now officially a Man Utd player, and his new teammates have been busy welcoming him to the club on social media.

As noted by BBC Sport, the Chilean international has moved to Old Trafford in a swap deal that took Henrikh Mkhitaryan to Arsenal, as he now embarks on a new chapter in his career with the Red Devils.

It remains to be seen when he gets his debut from Jose Mourinho with the FA Cup tie with Yeovil Town coming up on Friday night, but having now been unveiled by the club, his teammates have finally been able to react along with a club legend in Rio Ferdinand.

Ashley Young, David de Gea and Jesse Lingard were the first to comment on the signing, with the latter also aiming a cheeky dig at Arsenal.

Having scored a double in their recent 3-1 win at the Emirates earlier this season, the 25-year-old proceeded to do a ‘milly rock’ dance. In turn, he has suggested that Sanchez has come to join in with the United players having left the Gunners behind, as seen below.

With a 12-point gap to wipe out along with a long, tough road to go in the Champions League and FA Cup, Mourinho will hope that the addition of a player with the quality of Sanchez can make an impact this season.

However, beyond this campaign, they’ve signed a player in the peak of his career and they’ll hope the Sanchez from last year returns after he bagged 30 goals and 19 assists in 51 appearances for Arsenal to help move them closer to major honours in the years ahead.

Welcome to the ? family Alexis ?? https://t.co/lfVWMUQVre

Hello, Is That @Alexis_Sanchez ??? Welcome To @ManUtd ? I Knew You Wanted To Come Milly Rock With The Mandem ??? #manchesterunited #JLingz pic.twitter.com/n7qJk73QhW

‘Southgate hasn’t got a clue’ and ‘my eyes hurt’ – These England fans slam lineup for pre-Euros friendly against Austria June 2, 2021 18:56
International Football