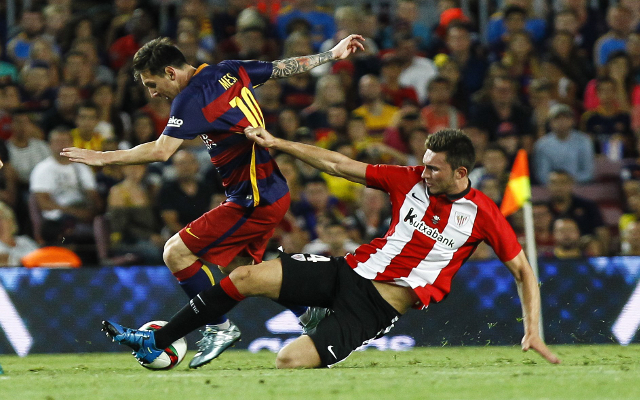 According to Spanish football expert Guillem Balague, Man City boss Pep Guardiola could have a new centre-half at his disposal later this week.

Based on the fact that they boast a 12-point lead in the Premier League title race, coupled with their progression to the League Cup final and their continued push for the FA Cup and Champions League, things are going well at the Etihad for the current group.

However, with question marks continuing to hang over Vincent Kompany given his injury track record, Guardiola has relied heavily on Nicolas Otamendi and John Stones this season.

The Spanish tactician still has Eliaquim Mangala to offer depth, but according to this report it would seem as though he isn’t entirely content with the options at his disposal.

Balague has told Sky Sports that he expects Athletic Bilbao’s Aymeric Laporte to join City in a £60m deal at some point this week, with the Premier League giants meeting his release clause.

The Sky Sports pundit goes on to reveal that the 23-year-old was wanted previously by Guardiola, but this time round he senses that a deal could go through.

That’s not news that Man Utd legend Gary Neville has met with great joy, as he took to Twitter on Tuesday to express, perhaps in a jovial way, that he believes the Red Devils should try and hijack City’s bid for the Frenchman.

Having spent a very brief and not very successful spell at Valencia, Neville notes how he went up against Bilbao on three occasions, and he was left very impressed with what he saw from Laporte.

In my very short time in Spain we played them 3 times ! This lad can play! Get in United … ? https://t.co/p3Bcqol4lH

That will be music to the ears of City supporters, as the Bilbao star looks technically gifted to fit into Guardiola’s style of play, while he’s a powerful and athletic presence at the back.

Stones and Otamendi could have competition on their hands, but it surely raises an even bigger concern for Kompany’s future in the side as he risks falling further down the pecking order, while it’s another blow for City’s rivals as they look set to continue to strengthen and address any remaining problem areas in Guardiola’s already very strong squad.