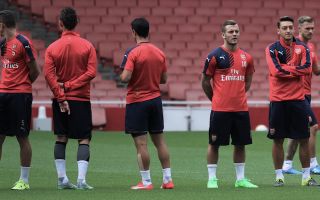 Juventus are eyeing a sensational triple-raid on Arsenal with Hector Bellerin, Mesut Ozil and Jack Wilshere all attracting interest from the Serie A giant.

A report from CalcioMertcato has stated that Juventus are lining up a huge summer transfer window after a mixed season thus far.

The current Serie A title holders are sitting in second place in the league despite being nailed on favourites to once again seal another domestic title. Juve currently trail Napoli by one point.

The previously mentioned report states that the Italian side are monitoring both Wilshere and Ozil with their contracts set to expire at the end of this season.

Further, while Bellerin’s current deal does not expire until 2023 the Italian side could be prepared to pay up to €40m for the Spanish right-back.

The news that Ozil is being eyed by Juve is likely to grow pre-existing fears amongst Arsenal fans that the German playmaker could leave in the summer. However, the above report states that Juventus could be put off by the German’s excessive wage demands and the Independent have further reported this week that Ozil is looking increasingly likely to pen a new deal at Arsenal.