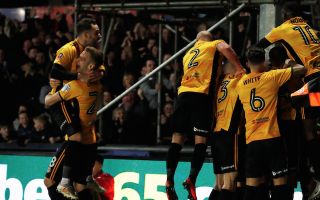 League 2 side Newport County hosted Tottenham at Rodeny Parade in the fourth round of the FA Cup.

Tottenham fielded a strong side with Harry Kane and Eric Dier both starting for Mauricio Pochettino.

Undeterred however by their Premier League rivals Newport took a surprise lead in the first-half.

Padraig Armond gave Newport the lead in the 38th minute when he converted from Robbie Willmott’s pinpoint cross. Rodney Parade understandably erupted as the Welsh side took the lead.

It took Spurs until the 82nd minute to equalise after a heroic defensive battle form the league 2 side. Harry Kane converted for Spurs after latching onto a flick-on from Heung Min Son.

Newport managed to hang on in the final few minutes and will now travel to Wembley for a replay.

While Padraig Armond will go down in Newport history as the goalscorer in today’s historic upset it was Joss Labadie who lead his side to a superb result.

Labadie battled from start to finish in the Newport midfield and even managed to outplay Premier League stars such as Moussa Sissoko.

Fernando Llorente has struggled to grasp consistent playing time at Spurs since signing from Swansea in the summer. While Harry Kane’s astonishing form this season is likely to be a key factor in Llorente’s limited time on the pitch it is worth noting that the Spaniard needs to grab hold of opportunities when handed to him.

Llorente looked uncomfortable against the League 2 side and was left isolated throughout. Tottenham’s attacking power certainly improved when the forward was pulled from the action on the 66th minute.

4 – Harry Kane has scored in each of his last four games for Tottenham in all competitions, his best scoring streak since November 2016. Equaliser.

Inevitably, fans and pundits were full of praise for Newport County…

Newport may feel frustrated that they held Spurs for 80 minutes but didn’t get the win…but they shouldn’t. They deserved the draw, and they and their brilliant fans deserve their day out at WEMBLEY!! Bravo @NewportCounty ????

That’s the final whistle. The Newport fans celebrate the draw like a victory. They’re not downhearted at all. They’re going to Wembley. Well deserved. They and their team were excellent.

Thank god that’s over, well played Newport you did yourselves proud and deserve the replay, still in the Cup that’s all that matters in knock out competitions and we can still win it but need to play better, Happy with the draw X

Bloody marvellous FA Cup tie at Rodney Parade: muddy pitch, panicked PL footballers & a home crowd that loves its team. Lad in front of pressbox called his mum as soon as Newport goal went in so she could hear the celebrations