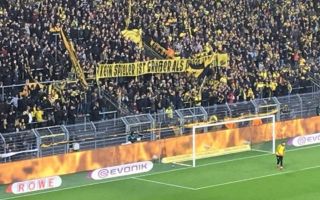 Arsenal target Pierre-Emerick Aubameyang was boo’d by Borussia Dortmund fans who revealed a banner targeted at the star upon his return to the Dortmund starting line-up.

Aubameyang’s future at Dortmund looks to be in fresh turmoil this weekend amid his return to action in the Bundesliga.

The respected Italian outlet CalcioMercato have reported that Arsenal target Aubameyang was boo’d off of the pitch yesterday during Dortmund’s disappointing draw at home to Freiburg.

Further, the Gambian international was the target of an angry banner unveiled by Dortmund fans which read “No player is bigger than the club.”

Aubameyang however took the opportunity after the game to controversially tease angry Dortmund fans with a social media post.

The striker uploaded a picture in Dortmund shirt with the caption ‘Hate me or love me.’

It looks as though Dortmund fans have made their mind up over where they foresee Aubameyang’s future. The Mirror however have reported that Arsenal will need to stump up a colossal £60m to complete a deal for the striker.