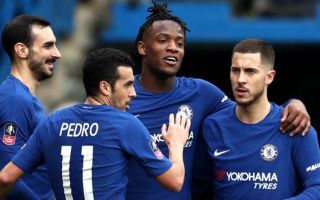 Chelsea hammered Newcastle 3-0 in the FA Cup fourth round at Stamford Bridge this afternoon to book their place in the next round of the FA Cup.

The Blues opened the scoring through Belgian Michy Batshuayi, who tapped home following a pass from Marcos Alonso.

The forward then added a second goal later in the first half, after he was out through by Eden Hazard before seeing his effort deflect in to give the Blues a two goal lead.

Spanish left-back Marcos Alonso then added a third in the 71st minute, as the former Fiorentina star fired home a 25-yard free kick to all but seal Conte’s side’s place in the next round.

Spanish ace Marcos Alonso will take a lot of the plaudits today, with the left-back bagging a goal and an assist in the Blues’ impressive victory against the Magpies today.

The defender’s assist showcased his level of unselfishness, with his free-kick showing everyone exactly what he’s capable of as he fired the Blues into a three nil lead.

This tweet sums up the player’s performance this afternoon

10 – Michy Batshuayi is the third player to reach double figures for goals for @ChelseaFC in all competitions this season after Alvaro Morata and Eden Hazard (12 each). Prestige.

As well as Alonso, a certain Belgian striker also had a game to remember this afternoon

Michy Batshuayi, the "£33 million Chelsea flop" now has more goals this season than £50 Million Lacazette, yes, you read that right.

One of those days Batshuayi looks like a genuine world class talent. Need to get him on loan, get him playing week in week out

Batshuayi has been class today

I wish we could have Batshuayi he's proper class #CHENEW #NUFC