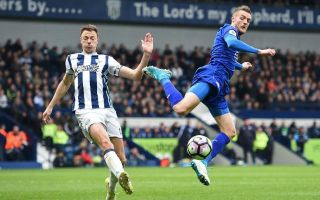 While the need for defensive reinforcements at Arsenal is obvious, reports that the Gunners sent a scout to watch transfer target Jonny Evans hasn’t gone down well.

The Gunners have conceded 31 goals in just 24 Premier League games so far this season, giving them the worst defensive record out of the top six sides.

As an indication of how far off they are from where they need to be, that’s almost double the amount that Manchester United and Chelsea have conceded.

In turn, signing a defender and addressing the issue seems like a sensible decision, with The Express noting how BT Sport commentator Jon Champion suggested that Arsenal had sent a scout to watch Evans in West Bromwich Albion’s win over Liverpool in the FA Cup at Anfield on Saturday night.

The 30-year-old would bring plenty of experience and a winning mentality with him to the Emirates following his previous successful stint at United, but after making a costly error this weekend, it’s fair to say that the supporters below aren’t overly keen on the idea of seeing him arrive at the Emirates ahead of Wednesday’s transfer deadline.

Arsenal have been active this month having already signed Henrikh Mkihtaryan and Greek youngster Konstantinos Mavropanos, who incidentally has impressed for the club’s youth side so far this month.

However, while he’s still raw at 20, Evans would offer a more immediate presence and boost for the side, with Arsenal needing more than Per Mertesacker to step in and offer cover and competition for the likes of Laurent Koscielny and Shkodran Mustafi.

Nevertheless, after committing an error in that dramatic win over Liverpool, Evans hasn’t done a great job of convincing Arsenal fans that he’s a wise signing, as evidenced by the tweets below as speculation was already rife before the game that he was being targeted by the north London giants…

Keep that Jonny Evans away from my club #gunners

Jonny Evans auditioning for his transfer to Arsenal. With that kind of mistakes, he would fit right in.

Jonny Evans looks like he has as much pace as Mertesacke…its a no from me for #Arsenal
Nice to see £75m later and #Liverpool still can’t defend for toffee???#bbcfootball #LIVWBA #EmiratesFACup

Jonny Evans can stay where he’s at ?

Really looking forward to Jonny Evans bringing some consistency to our back line…..??????

Please don’t tell me that’s the Jonny Evans that we’re in for ?