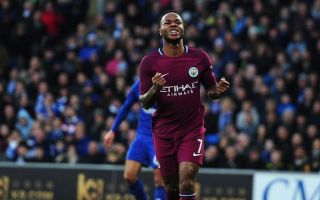 Manchester City eased to a victory against Cardiff City in the fourth round of the FA Cup despite the game being marred by controversial decisions.

Kevin De Bruyne gave City the lead against Championship side Cardiff City on the 8th minute when he converted a clever free-kick as he slid the ball under the Cardiff wall.

On the 24th minute Bernardo Silva looked to have given City a 2-0 lead with a superb effort from the edge of the box which rocketed into the near top corner of the Cardiff City goal.

The goal however was disallowed by referee Lee Mason who deemed Leroy Sane to be obstructing Cardiff ‘keeper Neil Etheridge from an offside decision.

Many fans watching the game could not see a reason for the goal to be disallowed and Mason received further criticism before the first-half was up when he allowed a horror challenge on Leroy Sane to not merit a red card.

Raheem Sterling added a second for City on the 37th minute with Pep Guardiola’s side marching into the fifth round of the FA Cup despite crucial decisions going against them.

Kevin De Bruyne looked at ease against the Championship club from start to finish and it was ultimately his clever free-kick, which can be seen below, which got the wheels in motion for City and squashed any potential cup upset within the opening ten minutes.

If you’re going to send your side through to the FA Cup fifth round, do it in style.

Lee Mason. That’s right, we’ve picked a referee as our flop of the match. How on earth Mason allowed the below challenge to not warrant a red card is beyond us. Further, perhaps if VAR had not caused such a fuss during Liverpool’s loss to West Brom last night we would be calling for further integration of the video technology.

5 – Man City now have five players to have scored at least 10 goals in all competitions this season, more than any other English league side (Aguero, Sterling, Sané, Jesus and De Bruyne). Mix. #CARMCI

The assistant ref decision in the Cardiff v Man City game got to be one if the worst for a while – what a finish it was/wasn’t ??

Can I just say Man City s goal been giving offside is a absolutely inbarasin keep dived when the ball hit the net rubbish ?

Cardiff – worst pub team I’ve seen for years. What a disgraceful challenge on Sane that was #ManCity – and what a shithouse ref Lee Mason is too